Bihar: What could happen? 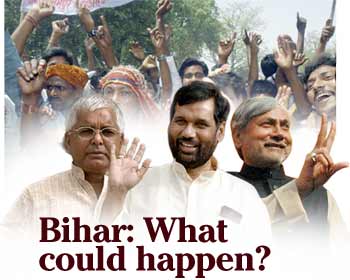 Deputy Managing Editor Amberish K Diwanji traveled through Bihar during the election campaign. This is his guide to the possible political scenario after Sunday's election results.

One of India's politically complex states has witnessed a hung assembly.

The Battle for Three States

It is clear that the RJD that has ruled Bihar for the past 15 years is no longer the all-powerful party it was.

We look at some of the key players and the likely possibilities in the days to come.

Lalu Prasad Yadav: The Union railway minister is also president of the RJD, the ruling party in Bihar for 15 years.

His wife Rabri Devi was installed as chief minister in 1997, after Lalu, facing a slew of corruption charges for which he even spent time in jail, resigned.

Lalu and the RJD went into this election clearly knowing they were facing a massive anti-incumbency vote due to the absolute lack of development across the state where the roads have more potholes than the surface of the moon.

He still commands a third of the assembly, which means he cannot be written off.

Moreover, the support of his 29 MPs in the Lok Sabha is what keeps the United Progressive Alliance on the Treasury benches.

Clearly, his best bet is a compromise, which means he stands to lose more to gain some.

Rabri Devi: She became chief minister on July 25, 1997, after the Central Bureau of Investigation secured a warrant to arrest her husband in the fodder scam corruption case.

Rabri Devi has never been happy being chief minister, seeing it as a duty to her husband in his hour of need, though to her credit, over the last seven-and-a-half years, she matured in the role.

Under the circumstances, it is doubtful if she will return as chief minister.

Paswan has shown an amazing ability to stay on the side of power (he is the only politician who has been a minister since the United Front government way back in 1996). 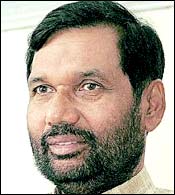 Last year, he split from the NDA to join the Congress-led front, and became a part of the UPA.

Soon thereafter, he and Lalu Yadav got into a bitter battle: both wanted to become railway minister and Paswan lost.

An angry Paswan then decided to contest the election in Bihar alone (he was later supported by the Congress), thus making the two-way contest a three-way battle, with the RJD and NDA as the other contenders.

His fledgling LJP has won about 30 seats -- not much out of 243 -- but considering what he was up against, he has reason to smile.

Not surprisingly, now everyone wants to support him.

The NDA has declared it will support him as chief minister while Lalu Yadav too wants his endorsement.

For the moment, Paswan has declared he wants President's Rule.

Sonia Gandhi: From the very beginning, it was clear the Congress was playing a very tricky game in Bihar.

Lalu was an integral part of the Congress-led UPA, but the party decided to oppose him in Bihar, backing Paswan instead.

Its hope was the Congress which has virtually ceased to exist in the state -- that even after its bifurcation (and the creation of Jharkhand) still sends 40 MPs to the Lok Sabha -- would revitalise itself in this election.

Now it finds itself in a huge mess.

For the Congress, the paramount concern is to ensure that the NDA does not come anywhere near power.

It remains to be seen what Sonia can do to placate Lalu Yadav who feels the Congress betrayed him while ensuring that Paswan does not ditch the Congress for the NDA.

There is also the option of President's rule.

Arjun Singh: The architect of the Bihar plan that saw the Congress move out of the RJD umbrella and align with Paswan.

The move has clearly backfired: the party remains in poor condition; worse, it now has to deal with an angry Lalu.

The old warhorse has lost his once deft touch.

NDA: In the May 2004 Lok Sabha election, it polled 35 per cent of the votes in Bihar to the 42 per cent polled by the RJD, Paswan, Congress and others (that later became the UPA).

Many believed that with Paswan splitting the so-called secular vote, the NDA would be the real beneficiary.

While improving its performance, the NDA has fallen short of the all-important halfway (122-seat) mark.

But there are some silver linings.

First, it has dislodged the RJD from its position of unassailable strength, and in the process, perhaps done some serious damage to UPA unity in New Delhi.

Second, it still has a chance to play a role in government formation by providing outside support to someone like Paswan.

BJP: For the BJP, winning Bihar was very important, especially after it messed up its chances in Maharashtra a few months ago. It was even more important for party president L K Advani to shore up his image as the person who can take the BJP  out of its current depressive mode, and for Arun Jaitley, who is in charge of Bihar.

The BJP has won more seats in Bihar than its ally, the Janata Dal-United, though it contested fewer seats than the JD-U.

If it can get Paswan to become chief minister with NDA support, Advani and Jaitley will more reason to smile even as they rue the missed chance of the NDA in power.

The anger against Lalu's lack of development was clear but Nitish Kumar and the NDA could not translate this strong anti-incumbency factor into clear victory.

If Nitish Kumar remains a contender, it is only possible if sufficient numbers of Independent MLAs back him and that the governor accepts such support.

He will remain an important player in he state.

Buta Singh: The governor will be the most important person in Bihar in the coming days.

An old Congress hand known for his loyalty to the Nehru family, he was Union home minister during the last three years of the Rajiv Gandhi government (1986 to 1989).

He was appointed governor after the Congress found it impossible to accommodate him in the UPA government as a minister, something he would surely have preferred.

With no party having a clear majority, Singh will decide whom to invite to form the next government.

The choice will be between the largest party (still the RJD) and the largest formation (still unclear).

If the picture remains confused, his paramount importance could go from days to months because the Congress-led central government may then place the state under President's rule.

Rabri Devi continues: Clearly, what Lalu would love most.

Paswan and he kiss and make up so that everything is okay in Patna, and more importantly, New Delhi.

Rabri Devi continues as chief minister, Lalu gives up the railway minister's chair to Paswan (since it was the fight over this ministry that led to the split in the first place), and Paswan's brother becomes deputy chief minister.

The problem with this option is why should Paswan, who has now emerged in a strong position, settle for merely being railway minister? Moreover, letting Rabri continue will hurt his support base.

Rabri Devi goes but the UPA stays in power in Bihar: More likely than the above-mentioned option, though Lalu is likely to fight it tooth and nail.

It also raises a far more difficult question: Who will be the chief minister and from which party?

Lalu would not like anyone else from his party become chief minister for fear of creating a parallel power centre.

He would also be loath to support a candidate from Paswan's party for fear of seeing his clout diminish.

The Congress, with about seven seats, can hardly claim the top post, but stranger things have happened.

Paswan is CM, with NDA backing: Even more likely than the above two scenarios.

The NDA has little choice but to back Paswan since it is determined that the RJD must not return to power.

Having influence over the Bihar government could go some distance in revitalising the NDA.

But taking the NDA route means Paswan will lose out on the backing of Muslims.

Nitish Kumar is CM with the Independents' backing: If the NDA nears or crosses the 100 seat mark, it will certainly scout around for support from the many Independent MLAs and smaller parties.

The difficulty will lie in buying sufficient support and retaining that support.

President's rule: An option the Congress would prefer the most.

A six-month stint of President's rule could help the Congress revive itself on the ground while it conceives political deals to sort out the current mess.

Lalu would be cagey about President's rule since he knows the Congress can only grow at his party's expense.

Out of power, the RJD could also split.

The people of Bihar -- battered by years of non-governnance -- may welcome a spot of central rule.