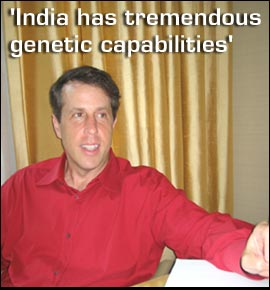 "I got turned on to Vedanta when I was about 11 years old," the President and CEO of NorthBridge Capital Management, an investment firm that provides financial services to major institutions, trading firms, and high net worth individuals, told rediff.com

"That started a lifelong love affair. And like all love affairs, it's come with its share of joys, and disillusionments. I'd say India has been the most important shaping influence on my life, my outlook, the way I see things."

Having been shaped by the Indian influence, Krieger now hopes to do some shaping of his own -- with the launch of IMG Bharata, India's first multi-discipline coaching academy of international standards.

Krieger, who will chair the IMGB project, spoke to Managing Editor Prem Panicker at his office in Fort Lee, New York.

You said you believe India has the potential to produce champions -- and you base that belief on what, precisely?

First, I'll grant you India's sporting record has been dismal, abysmal. Especially when you consider the size of the country, the people, the talent.

The India I know has tremendous genetic capabilities; but 700 years of foreign rule has put a dampener on it. I still believe that it is the greatest civilisation ever on this planet, and those strong genetic factors are bound to re-emerge -- if you look at what is happening to the country, the way geniuses are emerging to lead it in every field, it is already happening in a sense, people, leaders with vision, are emerging.

I think it is time for that to happen in the field of sports as well -- India today needs new heroes, different heroes from the ones Bollywood turns out. The talent pool is there, the genetic capabilities exist, I genuinely believe India can produce sporting champions, new heroes. At IMG, we found that it takes six years to produce a champion, starting from scratch and provided the potential is there. Since we are starting from scratch in India, we are not even talking of six years, more like twenty -- but in that time, yes, I believe India can produce a champion. Champions.

This 'genetic' thing is not quite clear to me. You say we as a nation have it -- so what does it take to bring it out?

When I talk of genetics, look, sports has been part of India's heritage for 5,000 years or more. Archery, for instance; wrestling; swimming, all these used to be part of Indian sporting tradition.

Specifically, how you bring it out is something we will get a feel of as we actually begin work -- but to give you an example of what I mean, we had a small training program in Guatemala, where we had introduced among other things our own nutritional program. We found our trainees grew 6-7" in that year, above the norm. The point is, we don't know yet what we have to work with - what we do know is, if programmes are planned for the material at hand and the work is scientific, results show.

It still begs the question -- why India? Why now?

The timing is absolutely right if you think about it. After stagnating for so many years -- even for a period after Independence -- the country is now looking to grow. Economically, it's shaping to be a world power, with a growth rate of 5 to 7 percent over the next 40 years, that will put it right in the top bracket with India and China.

Plus, it is a young country -- some 50 percent of the population under the age of 25 means 500 million very young people. Couple that with economic progress, and you are talking of a young country with disposable income, and a genetic predisposition to sports. It's really all falling into place.

And the potential obviously exists. Your cricket team is talented, is equal to the best in the world, but its players don't really come out of any organised training academies. Millions play in the streets, of these a few thousands make it to the higher levels, and from that you derive this pool of a dozen or so extremely talented players.

Or take your tennis players, Mahesh Bhupathi, Leander Paes. they are to my way of thinking geniuses, to have emerged out of India where there is no system, no structural backup, and to still rank in the top level in world tennis. My point is, there are dozens, maybe hundreds, more such geniuses in India, with the ability -- put a system in place, and you create the environment for that genius to emerge.

You mentioned China just now, when talking of India's economic spurt. China has the same advantages India has, in terms of growth, in terms of manpower. Plus, China is dead keen on sporting excellence at the highest level. So what made you chose India over China?

The difference between the two nations is, in China everything is government controlled, even sports -- and that decided us in favour of India.

If you think about it, sports is the ultimate entrepreneurial system -- it puts a premium on the individual's ability, on his talent, his drive, his confidence, his determination to excel. In sports, you invest in yourself - it is not enough merely for someone else to invest in you. India in that sense is entrepreneurial -- look at Vijay Amritraj, Bhupathi, Paes, Vishwanathan Anand, Prakash Padukone, so many talented sportsmen who come from there, they all back themselves, they all invest in themselves, they do it without waiting for someone on the outside to come looking for them and investing in them.

You have that spirit already -- a top quality training infrastructure rounds it off, it provides a place for these talented people to go, to hone that talent to world standards, to showcase their best.

One other aspect intrigues me -- no one invests good money without expectation of reward. You are a quintessential finance person. You are now heading an operation that plans to invest $120 million in India's sporting infrastructure -- how do you hope to recover that cost, let alone get a return on that investment?

First, that $120 million is the initial investment; we expect to have to spend much more before the results really start to show.

But the project is not really as pie in the sky as it appears. Firstly, the way it is structured, we expect that a majority of the students will be paying for themselves, or will have corporate and/or governmental sponsorships -- so the costs of their education and training are likely to be recovered anyway. That is the Florida model, where over 90 percent of our trainees have some form of scholarship funding.

Then, there are the spinoffs. For instance, one of the projects within the complex is a world class golf course and resort, and we expect from initial studies to have anything from 80 percent to 90 percent occupancy there. Then there are the corporates, who we expect will be interested in seminars, weekend retreats -- all of which we will be marketing.

And besides those immediate opportunities, imagine the endorsement capabilities of India's first Olympic champion, its first Wimbledon champion. When you think about it, the opportunities are endless. What it takes is for someone to believe in them, and in India, and to invest that kind of money, time, and energy to tap into the potential. We believe we are that someone.