Musharraf's remarks on Kashmir at UNGA uncalled for: PM

Prime Minister Manmohan Singh on Friday said he was "surprised" at Pakistan President Pervez Musharraf's reference to Jammu and Kashmir in his address to the United Nations General Assembly, but added that the dialogue between India and Pakistan would continue. 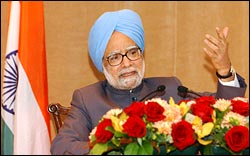 Addressing a press conference at the end of his visit to the United States on Friday, he said: "If we have to go back to the United Nations Security Council, then there's no point of holding the dialogue. But later, at the dinner on Wednesday evening, the President clarified his position and said I was not reading him correct."

Asked if, in the light of Musharraf's remarks on Kashmir before the UNGA, if he still maintained that the Pakistan president was someone he can do business with, Singh said, "He is the ruler of Pakistan, we have to be prepared to deal with him. His statement to the General Assembly need not have been made."

"In human affairs," the prime minister added, "we have to be prepared to deal with situations. I propose to remain engaged with Musharraf. I would applaud him for his courage and determination if he succeeds."

Any violence against civilians is terrorism: Musharraf

Asked about Musharraf's remark on Thursday that he was willing to resile from his country's stated positions on Kashmir if India did the same, the prime minister said: "We have adopted a constructive attitude, and the composite dialogue between the two nations has achieved progress. We can find a pragmatic solution to all outstanding issues."

PM rejects any justification for terrorism

Reminded of his remark that there can be no redrawing of borders and how that would sit with Musharraf, Singh said, "Our position on this has not changed, and Pakistan will have to determine its own course. I have often said that borders should be made irrelevant."

The task before the two leaders, he said, was to find ways and means to work around all the issues.

About the continuing violence in the Kashmir valley, Singh said he was impressed with Musharraf's unambiguous assertion to put in place in systems that will bring down infiltration. "I hope he is right."

"I have said before, in my talks with the All Parties Hurriyat Conference, that if violence indeed comes down, we will ensure a reduction in troops."

About the atrocities on civilians by security forces, the prime minister said that he was committed to safeguarding the human rights and dignity of all. "We have also agreed to review the cases of all those people behind bars in Jammu and Kashmir."

Asked if, in the light of Musharraf's remark on Kashmir before the UNGA, he still maintained that the Pakistan president was someone he could do business with, Singh said, "Our primary aim in coming here was to address the United Nations General Assembly. The talks were a sideshow, and cannot be expected to result in a breakthrough. The point is, we met for four hours, the discussions were frank. I record the outcome as a constructive one."

Asked about forward movement in the discussions with the United States over the civilian nuclear agreement between the two countries on July 18, Singh said that will happen with the US President George W Bush's visit to India early next year. "We are engaged with the US administration," he said.

In this context, the prime minister clarified that the remarks about former prime minister A B Vajpayee's criticism of the nuclear agreement during his talks with the US president were "casual remarks." "I made that reference in passing, and it was not my intent to discuss Indian politics overseas."

The ties with Iran will not impact the nuclear agreement with the US, Singh said and that Bush had reaffirmed his commitment to the nuclear deal in their talks on Tuesday.

"Our position on Iran is clear, another nuclear weapons state in the neighbourhood is not necessary. Iran, being a signatory to the Nuclear Non-Proliferation Treaty, should honour its international commitments. All we are saying is that diplomacy must be given the maximum possible scope. The International Atomic Energy Agency should be given the maximum possible scope."

Iran did not pose a crisis to the relations with the US, Singh insisted. "I discussed the issue with both President Bush and Secretary of State Condoleezza Rice. We are not holding an alibi or brief for Iran's nuclear programme. In objectives, there is no difference between our position and America's." There could be differences over the tactic, he said.

There are three and a half million Indians in West Asia, Singh pointed out, and anything that happens in the region could impact India in terms of remittances, balance of payment, etc. "We also have the second largest Shia population in India. . . we have to weigh all these factors." These points were explained to Bush and Rice, he added.