News
Business
Movies
Sports
Cricket
Get Ahead
Money Tips
Shopping
Sign in  |  Create a Rediffmail account
Rediff.com  » News » An analysis of the PM's speech to the joint US Congress

An analysis of the PM's speech to the joint US Congress 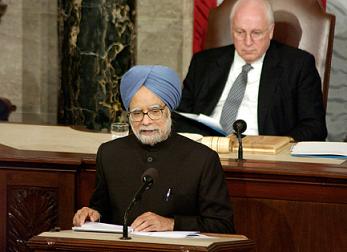 Three thousand, one hundred and five words, give the few innocuous ones he extemporaneously inserted into the text and take the few he spontaneously omitted. A fraction over 35 minutes delivery time -- and, not counting the standing ovation when he was introduced and the sustained applause when he concluded, 29 interruptions for applause.

That's the statistics of Prime Minister Manmohan Singh's speech to the joint session of Congress, in the Great Hall of the House of Representatives, on Capitol Hill. And beneath those statistics, lie little stories.

Buzzwords and phrases like 'commitment to democracy' are guaranteed applause-bait, and they did not disappoint. References to initiatives jointly agreed on between President George W Bush and Prime Minister Singh, too, invited and got applause; as did a reference to the achievements of the Indian American community.

References to the need for a hard line on terrorism, without sacrificing the openness that characterises the democracies of the US and India, were similarly guaranteed to go down well with the assembled lawmakers of both Houses. They did.

It told the lawmakers that they would not have to look too hard to justify anything they did in the name of this partnership; that every step, every act either nation took in the direction of the other had its own in-built justification. The lawmakers loved it, and showed it in the fervor and duration of the applause.

And yet, the most significant moment came towards the very end when Singh, in the strongest articulation yet of the case for India to be accorded a permanent seat on the UN Security Council, made his pitch openly to the lawmakers.

'On the reform of the United Nations,' Singh told his audience, 'we believe that it is time to recognize the enormous changes that have occurred since the present structure was established. There must be comprehensive reform of the United Nations to make it more effective and also more representative. The UN Security Council must be restructured as part of the reform process. In this context, you would agree that the voice of the world's largest democracy surely cannot be left unheard on the Security Council when the United Nations is being restructured.'

It was said to a Congress heavily weighted in favor of the Republican Party. It was said in the middle of a week where Secretary of State Condoleezza Rice and President George Bush have led the administration's effort to clarify that the US would not back India's bid for a SC seat.

And it was the paragraph that took the longest time to deliver -- because every single line, without exception, was punctuated with applause -- the last one drawing the loudest, and longest, of ovations.

In that demonstration of support there lies, perhaps, tea leaves the Indian diplomatic corps, and government, could possibly read.

Certain buildings encapsulate certain traditions as none other can. Buckingham Palace, as an emblem of an increasingly archaic monarchy. Lord's, as the home of the game of cricket. And in context of today's events, the Great Hall of the US House of Representatives, as an emblem of democracy in action.

It's there -- history, tradition, symbolism -- wherever you look. From the stained glass eagle embedded in the ceiling, to the circular shields of each state in the Union, framing the eagle, to the calm, controlled efficiency of the page boys and girls who walk down the aisles distributing advance copies of the speech Singh is about to make, to the flat crack of House Speaker Dennis Hastert's gavel that stops a hundred conversations dead and creates silence for the usher to step halfway down the aisle and announce, 'Mr Speaker, the Honorable Prime Minister of the sovereign Republic of India',
there is a sense of gravitas that is impossible to encapsulate in words.

Or perhaps not. Daniel Webster -- statesman, lawyer, orator, and perhaps the greatest champion of American nationalism of his, or any, era -- once did.

Set in gold letters, close to the ceiling and above the seat of the House Speaker, are these words that perhaps best sum up the need for, powers of, and goal of, a legislative body: "Let us develop the resources of our land, call forth its powers, build up its institutions, promote all its great interests, and see whether we also in our day and our generation may not perform something worthy to remember."

It was not a full house -- at least, not of the lawmakers themselves. Thus, the row in back was filled with scrubbed, clean cut page boys and girls in their black suits, white shirts and striped ties, brought in to make up the numbers.

But the list of lawmakers attending was impressive - and representative. Speaker of the House Dennis Hastert was there. Obviously, since it was he who had called the joint session. So too Vice President Dick Cheney -- in his
capacity of Speaker pro-tem of the Senate. From Senate Majority Leader Bill Frist, through senior Senators of the order of Ted Kennedy, Sam Brownback and Richard Lugar to Hillary Clinton and rising Democratic star Barack
Obama, to India-friendly Representatives Frank Pallone, Joe Wilson et al -- and the Indian-American community's sole Congressional representative Bobby Jindal -- they were all present and accounted for.

The Indian delegation, led by Montek Singh Ahluwalia, found seating space on the floor of the House, to the left of the Speaker. Above them, in the visitors' gallery, sat -- in one heavyweight row -- Mukesh Ambani, Dipak Parikh, Ratan Tata, and the Hinduja brothers Srichand and Gopichand.

The CEOs noticeably triggered, and led, the applause when Singh referred to the launch of the CEOs Forum, as a means of stepping up economic cooperation between the two countries. Elsewhere in the galleries was a sizeable
sprinkling of Sikh community leaders, come to honor their own -- including a contingent of white Sikhs.

As speeches go, this one -- delivered with characteristic lack of verve by a man uncomfortable with public speaking and unschooled in the ways of the demagogue who can make the insipid inspiring -- didn't go too far. It did not say much that was new, and it said it in too many words.

Yet, in the frequent interruptions for applause that punctuated it -- 29 of them, over the 35-minute duration of the speech -- there perhaps lay a message: India is a buzzword today, one that not even the lawmakers on Capitol Hill -- who walk in to the Great Hall knowing the decisions they take can, often do, impact on lives in nations they couldn't pick out on an atlas -- can resist.