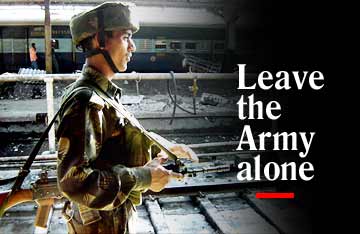 'The job of the armed forces is to preserve democracy, not practice it!'

January 15 is Army Day, and a time for introspection.

It was the great Winston Churchill who in the 1950s once grumbled that the Americans were pressuring him only because he no longer had the Indian Army with him.

The fact is (never acknowledged by the snooty and racist amongst the British) that it was the Indian army that saved Britain in both the world wars, during the German offensive on the Marne river in World War I and during the Second World War in the Middle East and Burma.

In World War II, more Indians won the Victoria and George Cross decorations than the British.

But recent events have cast a dark shadow on that shining image of the Indian Army.

Some years ago, the Tehelka episode showed officers consumed by greed falling prey to arms agents.

On top of that comes the expose of the 'Booze Brigadier', the Ketchup Colonel and the 'Video Major'.

Yes, I am alluding to the brigadier who sold canteen liquor in the market, a colonel who faked incidents in Assam to win an gallantry award and a commanding officer of the Gorkha battalion making fake video of a non-existent attack.

These could well be instances of individual aberration -- not uncommon in a huge organisation of over a million persons. There are stories of British Quarter Masters selling tents to their German enemy in North African deserts during World War II.

But what if these are symptoms of a deeper malaise?

At the basic level, Indians do not understand that the armed forces of even a democratic State cannot be run on democratic principles.

On a public interest litigation it asked why the army used emergency powers given during the Kargil war to buy tank ammunition when the fighting was going on in mountains where tanks cannot be used.

The honourable judges do not know that there was every chance of the fighting escalating to Punjab, where tanks would have been needed.

Or take another recent PIL in the apex court on the army granting commission to an ex-insurgent in Kashmir.

Do the judges know that not one or two but hundreds of ex-insurgents in Nagaland in 1976 were absorbed in the BSF, creating a whole battalion, the 111 BSF Battalion, whose commander was the former rebel leader Zoheto?

'Judiciary must be overactive'

The media, under the garb of 'transparency,' has been sensationalising such events, and has taken a self appointed adversarial role vis a vis the armed forces. It should take a leaf from the book of the Western media that is very, very careful when it comes to coverage of the military.

Partly, all this lack of understanding of the requirements of the armed forces is due to the fact that our country has never gone thorough the kind of trial by fire that most of Europe, China and the US went through. As a proportion of population, the US suffered more casualties in the Korean war than India suffered in all its wars since Independence.

Mahatma Gandhi started the 'civil disobedience' movement against the British in the 1930s. The British are long gone but Indians continue their disobedience of the laws of the land.

The rich break laws to get richer, the poor for survival. But most Indians break laws by just habit and for no particular gain.

Freedom has come to mean licence. The armed forces are a part and parcel of society and cannot remain isolated from its ills.

That it took so long for the effects to manifest was due to the positive organisational inertia of factors like a soldier's pride in himself, his regiment and the Kshatriya Dharma.

The rise of materialism and Marxist/leftist dogma has meant that Indian nationhood is being increasingly defined on economic rationale and in materialistic terms. India is seen as a collection of individuals held together for economic benefit/necessity.

Talk of Indian civilisational identity is dubbed as 'toxic' and our common heritage is sought to be denied. All this has convinced many Indians that economic gain is the 'sole' criterion for national and individual existence.

If the individuals taking cue from it make it their life's goal can they be blamed?

This has diluted the Kshatriya Dharma, the hallmark of which is duty to protect the country and its citizens irrespective of caste, creed or colour. Before the Marxist begin jumping, it must be clarified that 'Dharma' is not religion, but duty or righteous path.

The post-Independence Indian leadership never understood the importance of strong defence forces as the 'Sword-Arm' of the nation.

In their conception, the army was like chowkidhars (gatekeepers) of the nation.

Major General 'Baba' Bhide, the officer responsible for planning the logistics for the successful Bangladesh war of 1971, personally witnessed Nehru questioning the high salary for a 2nd Lieutenant, when, in his words 'we can get a police sub-inspector at half the price.'

The Chinese gave a jolt to Nehru and India in 1962, but the neglect of the army is so deeply ingrained in the modern Indian psyche that we soon reverted back to the old pattern.

We even have a Cabinet minister who, during his student days in England, collected funds for Chinese soldiers in 1962, when Indian soldiers were dying due to lack of warm clothing. So it is no wonder that the looming crisis of credibility of the army is neither anticipated nor addressed.

The political leadership in India has swung from intrusive interference (the cronyism of the Nehru/Menon era of the 1960s and the recent casteist intervention by an ex-defence minister) to benign neglect, leaving it to the armed forces leadership to sort out issues.

The army and God are remembered only in times of distress.

Powerful external forces have been engaged in subverting the Indian armed forces during the entire Cold War period. It was relentless psy war against the concept of composite Indian nationalism (not Hindu nationalism).

One hoped that the end of the Cold War would change this. But there are signs that it still persists. This campaign has used a variety of methods, and the Indian media often acts a tool of subversion.

Internal electoral politics has been thriving on fanning caste, class and creed divisions. From the notion of the Nehruvian era when airing it in public was a taboo, we have come to the stage of openly flaunting it.

Is it any wonder that this cancer has began to affect the armed forces as well?

While the army is coping with a series of scandals, another elite cadre, the Indian Police Service, faces an even graver crisis. In Maharashtra, it sometimes seems, there are more top police officers in jail than outside it.

It is indeed a frightening prospect that ought to concern all Indians.

The social changes taking place have had their effect in diluting traditional values, for long a bedrock of an Indian soldier's motivation.

As the officer class becomes more and more broad based with persons from low income groups climbing the ladder, nearly 60 per cent of the officer cadre now belongs to persons of a marginal economic level. There is a great premium on success.

This certainly promotes fierce competition and efficiency, as seen during the brief Kargil conflict. But on the flip side, this also increases the tendency for short cuts to success.

At the very root, the crisis developing in the army is a reflection of the national crisis of governance and cannot really be dealt with in isolation.

Politicians must begin to think of tomorrow and the future of their grandchildren, not just the next election.

The armed forces must on their part look at their structures and systems.

Structures dictate functions and make even recalcitrant individuals fall in line. If all these years the army remained immune from the diseases of society it was due to its strong regimental structure, the spirit de corps and élan (izzat).

Organisational structures need continuous renewal, repair and reform. Here the politicians have a vital role as the impulse to reform is difficult to come from within the organisation.

It is time that on the lines of the administrative reform commission a 'blue ribbon' panel is constituted to study the issue in depth. Mere tinkering like lowering the commanding officer's age will just not do.

The media, the judiciary, the administration and politicians must take a long term view and treat the armed forces as a holy cow. This is the only job in which dying is part of the charter of duty. There are no prizes for coming second best.

Supercession is the norm and a bare ten per cent make it to the exalted ranks of general. In the civil services it is 100%.

A larger than life ego is part of a service officer's personality. It is only this that makes him take the decision that affects his own and his comrade's life.

It is but natural that when denied promotions, most feel aggrieved. But civil society must realise that this is a price of efficiency and both the media and the judiciary should be far more circumspect in giving credence to the grapes are sour tendency.

All must remember that all goals, justice, freedom, democracy and equality are secondary to the first priority of national security and survival.

Reforms are difficult till a crisis looms. But successful organisations carry it out before, and not after the crisis.

This is easier said than done. I had tried my hand at drawing attention to some of these issues way back in 1988.

My paper on a structural functional approach in the first-ever Chief of Army Staff Gold Medal Essay competition won a special prize, thanks to an intellectual like General K Sundarji as the Chief.

But in spite of that when I sought to provoke a wider debate my attempts to get it published in the army's internal publications failed. I tried for nearly three years and even a friendly general who knew me well would not touch it with a barge pole!

The army can take steps to include motivational education giving emphasis to the roots of Indian nationalism, our ethos, our egalitarian constitution and pluralism. This must form part of the core of army training at all levels from jawans to officer cadets. The army also must open its organisational structure to scrutiny and reform. There is no secrecy involved here unlike in operational plans et al.

But most of all, all concerned should be aware that the armed forces are the last pillar of strength of the State that is still not corroded like the erstwhile steel frame. It must be protected and strengthened.

Doing nothing is not an option.