'Yesterday we buried our grandson. Today our granddaughter' 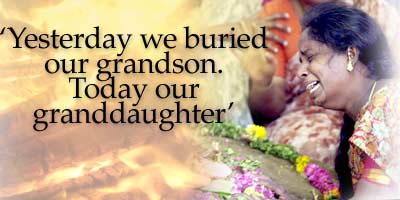 Aaraaro kannay aarraro is a lullaby known to all mothers in Tamil Nadu. That's the song they sing when they put their babies to sleep.

The lady was singing this song outside her hut. But there was no child.

Her child was one of the 90 children who died in the fire at the Sarawati Nursery School in Kumbakonam on Friday, July 16.

"Oru pidi chor thaney keypaa (all you used to ask me was one handful of rice)," wailed the mother. Some women passing by were moved to tears.

None tried to console her, perhaps because they didn't know how to do so.

In the next hut another mother wept. Her son died inside the school; her daughter was fighting for her life in a hospital in Thanjavur.

"My daughter and son, the last I saw them was at 9.30 am yesterday (Friday). They were dressed so smartly in their new uniforms. My son bought me tea from the shop. See that glass there. I still haven't returned that glass. But my son will never return. My daughter used to bring her friends home to eat. I am poor, but I always fed them. Now will she return? I don't know. She was so scared of her father. The first thing she used to ask when she came home was if her father was at home. One day a beggar woman told her she had nothing to wear. She gave that old woman my new saree. I have never hurt a soul in my life, why did this happen to me?" she cried.

Another woman who also lost her children in the fire cursed the school headmistress.

"When I heard there was a fire I reached the school and saw the headmistress standing outside. I didn't even ask if my children were safe, I asked her what had happened to the children, all the children. That woman said all the children had been taken out. That woman lied. I used to respect her so much. She will never be happy. All this sin will fall on her head. When will I see my children again?"

After the tragedy 23 teachers went missing. One of them has since reported to the police station.

The lack of space was the main reason for the tragedy.

The school was only 20 feet wide and 70 feet long. Classes were held on the ground floor, first floor and second floor. The classrooms were like corridors with no solid partition between them. Each floor had five classes.

Each floor had an open terrace, which was covered by a thatched roof. It was these thatched roofs that caught fire and fell on the helpless children.

Behind the school is the kitchen that was used to feed the children under the Tamil Nadu government's noon meal scheme. Fire from the kitchen spread to the thatched roof resulting in the tragedy.

More than 600 children in the senior classes ran out when the fire started, but the younger ones in the primary classes could not escape.

There are allegations that there were no teachers or senior students to guide them out.

The school had two staircases. A three feet wide staircase at the back and a two feet staircase in the front. As the roof caved in at the back, that staircase was rendered useless. Only the front staircase could be used to escape. And it proved too small for all the children.

The school was first granted recognition in 1950. Despite being in existence for 54 years, the school did not acquire more space or replace its thatched roofs with concrete ones.

According to state government rules, recognition has to be renewed every three years. The last renewal was done on 10.9.2002 and the licence is valid till 9.9.2005.

Among the four schools, the children of the Sri Krishna Primary School bore the brunt of the fire. The attendance marked on the wall reveals that there were 272 children on the premises that day.

The walls are darkened. There are books and bags lying everywhere. The electricity has been shut off. The police are keeping the public outside, but there are journalists all over the place.

Experts from the forensic department are taking samples from the kitchen, to find out if there was anything else inflammable that was being used apart from firewood.

There are two gates in the school. One small gate outside the principal's office, which was open when the school caught fire.

The other bigger gate was locked. The watchman had locked it and had gone to have tea, when the tragedy happened. Even when he came back he could not find the key in that turmoil. Fire officer K Kumar finally broke that lock to get inside.

The watchman is absconding along with the teachers.

Adjoining the school is a temple where a priest was conducting the morning prayers when the fire broke out.

"The road in front of the school is 25 feet wide and there is a 10 feet wide canal. But the fire was so intense that it leapt across the distance, burnt the thatched roof of the house on the other side of the road. Luckily, an autorickshaw driver put out that fire before it damaged that house," the priest told rediff.com

Two tall coconut trees near the kitchen, taller than the two floor building, are completely burnt. An indication of how high the flames leapt.

A student who survived the tragedy told rediff.com that the school was expecting an inspection by an education department official.

The school had allegedly shifted English medium students from the ground floor to the Tamil medium classes on the upper floor to convince the official and claim the grant-in-aid.

As per the norm, the teacher-student ratio should be 1:40 in Tamil medium schools, especially for getting aid under the noon meal scheme.

As the strength of Tamil medium students in the primary classes was low, many children from the English school's primary sections were allegedly shifted to the second floor.

The fire brigade was the first to respond to distress calls. The police joined the firefighters a few minutes later. Two units from the local fire station were the first to arrive at the disaster site. They were joined by six other units from nearby fire stations. In all 80 firemen were involved in rescue operations.

"We were amazed that in spite of the gravity of the tragedy there were no adults there, no teachers, no administration people, no peons, no watchman. They had all run away," Fire Officer K Kumar said.

Inspector T Ramachandran, who is investigating the case, said his men stood shoulder to shoulder with the firemen and helped in the rescue.

"It's sad. When the Mahamaham tragedy happened years ago I was a sub inspector in this station. At that time I carried out old people. This time around it is children," he said.

He has so far arrested the secretary of the school, Pulavar Palanisamy, and the correspondent Saraswati, Palanisamy's wife; headmistress Santhalakshmi, Palanisamy's daughter; noon meal organiser Vijaylakshmi and cook Vasanthi.

He said the absconding teachers may be arrested if the state government directs the police to do so. Those arrested are being charged under sections 304, 338, 285, 108 and 109 of the Indian Penal Code.

They are also being charged for violation of rule 3 of the Tamil Nadu Primary Education Act and rule 5 of the Municipal Administration Act.

These charges, if proven, could lead to rigorous imprisonment for 10 years.

Fifteen children who died were from the nearby village of Natham, which does not have a government primary school. These children opted to study in the Sri Krishna Primary School.

As this correspondentleft the hospital he heard one old lady cry: "Yesterday we buried our grandson. Today it is our granddaughter."

Ninety children have lost their lives. Nineteen children will carry burn injuries for the rest of their lives. More than 700 students are mentally scarred forever. The state government needs to wake up.

A Ganesh Nadar in Kumbakonam
Print this article

Will speak with Kashmiri youth, not Pak: Shah