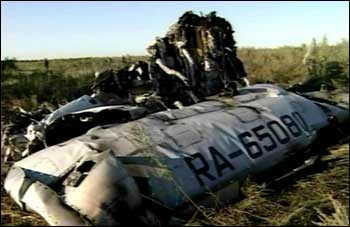 The two Russian passenger jets that took off at the same time and mysteriously disappeared off the radar screens almost simultaneously have crashed, officials said.

In an apparent terrorist strike, one aircraft crashed while another broke up in mid-air killing all 90 people on board the airliners hours after they took off from Moscow's Domodedovo airport late last night.

A Tupolev Tu-134 plane with 44 people on board, including 8 crew, crashed in the neighbouring Tula region about 200 kms south of Moscow.

Around the same time another aircraft Tu-154 of Siberian airlines with 46 people on board disappeared from the radars after sending a distress signal suggesting it had been hijacked.

Its wreckage was found nine hours later at 0944 IST this morning in the marshy land in Rostov region 965 kms south of Moscow.

The airliner apparently broke up in the air and its wreckage was spread over an area of 50 kms, reports reaching Moscow said.

Both the aircraft had left Moscow's Domodedovo airport 40 minutes from each other. "The fact that both the planes took off from the same Moscow airport and disappeared from radar screens at about the same time suggests a planned terrorist attack," Interfax reported quoting an expert.

The Russian Emergency Situations Ministry said everybody on board the Tu-134 were killed. It said rescuers found the airplane's main section some two kilometres in Chalki village in the Tula region.

The plane, belonging to the small Volga-Aviaexpress airline and en route for Volgograd, crashed near the village of Buchalki.

The second plane with 38 passengers and 8 crew members on board went out of contact near Rostov-on-Don after activating an alarm that it had been hijacked.

Body parts have also been found along with fragments of the second plane, Interfax quoted federal Emergency Situations Ministry as saying.

It said the parts were found near Gluboky, a village north of the regional capital Rostov-on-Don. The plane was flying from Moscow to the Black Sea resort of Sochi where President Vladimir Putin is currently vacationing.

Putin was immediately informed of the tragedy concerning the airliner Tu-134 that crashed in the Tula region and of the disappearance of a T-154 airliner from the radar screen, Itar-Tass reported.

A high power experts team of Federal Security Service Bureau (FSB), Emergency Situations, Interor and Defence Ministries has been set up to invstigate into the crashes of two airliners.

According to ITAR-TASS the Prosecutor General of Russia has launched a criminal case under article 263 or violation of air safety rules resulting deaths of passengers due to negligence. Security has been tightened at Russian airports and the authorities said they are not ruling out a terrorist attack as a cause of the crash.

Vinay Shukla in Moscow
Source: PTI© Copyright 2021 PTI. All rights reserved. Republication or redistribution of PTI content, including by framing or similar means, is expressly prohibited without the prior written consent.
Print this article