News
Business
Movies
Sports
Cricket
Get Ahead
Money Tips
Shopping
Sign in  |  Create a Rediffmail account
Rediff.com  » News » 'Does the Constitution not apply to Gujarat?'

'Does the Constitution not apply to Gujarat?' 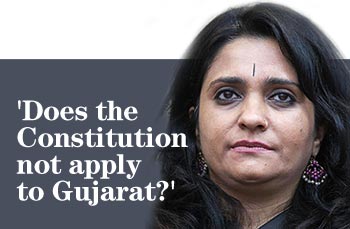 Can an individual take on a system?

If you are Teesta Setalvad, the answer is yes.

Setalvad, secretary of Citizens for Justice and Peace, a non-governmental organisation, and editor of Communalism Combat, a magazine that aims to fight communalism, won a major victory on Monday when the Supreme Court ordered a retrial of the Best Bakery case from the 2002 Gujarat riots in neighbouring Maharashtra.

Two years ago, Zahira Sheikh witnessed the burning of the bakery in Vadodara on March 1, 2002. Twelve persons, including members of Zahira's family, were killed in the incident. Twenty-one persons were arrested in connection with the crime. But in June 2003 all were released as 39 out of 43 witnesses in the case turned hostile, including Zahira.

Zahira later told Setalvad that she was forced to lie in court because of threats from local activists of the Vishwa Hindu Parishad and the ruling Bharatiya Janata Party.

Setalvad and the Citizens for Justice and Peace then approached the Supreme Court and urged that the case be transferred to Maharashtra. Her petition was admitted in January and on Monday the Supreme Court issued its historic order.

Setalvad spoke to Senior Assistant Editor Syed Firdaus Ashraf about what she has encountered since she started pursuing the Gujarat riot cases.

What was your first reaction to the Best Bakery case moving to Maharashtra?

I am extremely happy and extremely satisfied. At the individual level and organisation level of Citizens for Justice and Peace and Communalism Combat, we have been documenting the entire Gujarat carnage. We participated in the Citizens Tribunal and we have been involved in many, many cases of the Gujarat riots at the sessions court level, high court level, and Supreme Court level. This is the first time we have got a judicial decision. It is very favourable, so it is extremely satisfying.

Is this the only case you are handling from the post-Godhra riots?

We are also seeing the Gulburg Society massacre trial, the Sardarpura massacre trial. We have another three cases pending in the Supreme Court, the hate speeches of (Gujarat Chief Minister) Narendra Modi and (Vishwa Hindu Parishad leader) Ashok Singhal and another one on the question of transferring the riot cases to the CBI (Central Bureau of Investigation).

You were actively involved in getting justice for victims of the Mumbai riots of 1992-1993. You worked hard to get the perpetrators of those riots punished. But nothing happened. So why do you think Zahira will get justice in Maharashtra?

About the Mumbai riots, I think it is definitely true and very unfortunate. It is sad that many of the politicians and policemen who were indicted by Justice [B N] Srikrishna were not convicted and there was no prosecution against them. I do hold the government responsible for not following the cases properly. But in this case we are keeping good scrutiny of the case. If we keep this tempo and keep up scrutiny, then we hope to get justice for Zahira from Maharashtra.

We cannot leave the trial on its own now. We have to be there. The Citizens for Justice and Peace will follow this case on a day-to-day basis. We will be monitoring the case very closely.

How many post-Godhra rioters have been convicted?

None, except in one case where 12 people were convicted in Kheda district. Apart from that, no conviction in Gujarat has taken place post-Godhra. There were a minimum 2,000 people who were killed and only 12 people have been convicted so far!

Don't you think by pursuing such cases you will only help Chief Minister Narendra Modi and the BJP, even if indirectly?

I don't believe so. This is the hype the BJP creates. I believe a majority of the Gujarati people are happy with this conviction. Eighty-five percent of Gujarati people don't want the rioters to go scot-free. You go tomorrow to any part of Gujarat and you will find there is a lot of satisfaction with this decision of the Supreme Court.

But it is not seen on the ground. Mr Modi won by a huge margin in the assembly election. Also he is extremely popular among Gujaratis.

Unfortunately he won. Modi won an overwhelming majority and it is a sad truth. But 51 percent of Gujaratis voted for Modi and 49 percent voted against him. Now, 49 percent is not a minority. There are 10 to 11 percent people from the minority community in Gujarat. So who are the rest 38 percent?

You have to look at it both ways. Of course, we have to respect his victory, but I want to ask: Who are these 38 percent who did not vote for him? The point is that when people are going for reconciliation in Gujarat, the Vishwa Hindu Parishad is bullying them. Peace activists are threatened by the VHP and their hoodlums.

The VHP is a political outfit, not a religious outfit. They are not dealt with by law and that is when such a situation prevails. It is not a sentiment for Modi, but it is a created sentiment.

A recent opinion poll predicted that 24 of the 26 parliamentary seats in Gujarat will be won by the BJP.

This is the crisis of the opposition. Today, India lacks credible opposition. I have been saying publicly that if you want secularism, social justice, development, and a human face, then you have to give flesh and blood to the meaning of the word secularism. You cannot beat the drum of secularism only during elections. That is what the Opposition parties are doing.

You have to oppose majority and minority communalism all the time. You have to talk of justice for the majority and the minorities, for both Godhra and post-Godhra riots victims. You have to talk about representation for minorities in the police force. Who is talking about all these things all the time? The BJP has consolidated the Hindu vote bank. A lot of Hindus don't want to vote for the BJP. [But] they don't know where to go because the Congress has discredited itself.

Post-Godhra, can you say what attracts Gujarati Hindus to the BJP?

I will repeat that 49 percent of Gujarat did not vote for Modi.

There has been a growth of right-wing ideology over a period of 15 years. The VHP and the Bajrang Dal have dug their heels very deep in Gujarat. They are present in every [section of] civil society. They operate in business associations, doctors associations, teachers associations.

Everywhere they have a VHP wing. If a Hindu Patel doctor wanted to go and treat a Muslim patient during the riots, one call from a VHP bigwig and he was stopped and threatened. This is not democracy, but lack of rule of law. This is not a majority and minority issue. It is goondaism and they are allowed to get away with it.

You change the guard in Gujarat with President's rule for six months and you will see a sea change. The only reason we are seeing this day is because the VHP men are not dealt with strictly. They are allowed to threaten people in Gujarat.

Yesterday, I was threatened. What right do they have [to do that]? Has Gujarat seceded from India? Does not the Constitution of India apply to Gujarat?

I always feel that the image of Gujarat is created, not a genuine one. The people of Gujarat want to live with their minority neighbours, but the VHP and Bajrang Dal ideology won't allow them to do so because they thrive on difference.

During a tour of Gujarat to cover the assembly election in December 2002 I found that the general perception among Hindus is that the Congress supported Muslim goondaism and it was only Modi who supported Hindus and protected them from Muslim violence. How far is this true?

I think your perception is right to some extent. I have also had people tell me this, that the Congress created Muslim goondas and therefore we are creating Hindu goondas.

The success of the BJP is a big tragedy, but the bigger tragedy is that there is no strong opposition. If there is a credible opposition, a lot of people will support them with josh [enthusiasm] in large numbers.

Why do you always take an anti-Hindu stance?

This is what the BJP and Bajrang Dal always complain about you.

This is typical BJP-Bajrang Dal propaganda. I am born a Hindu. I know my conscience. I know from where my faith comes. I know the BJP, VHP, Bajrang Dal and Shiv Sena don't speak for Hindus. They just misuse, malign the name of Hinduism. They are not spokespersons of Hindus. I cannot accept what they say. They want good Hindus to keep quiet, but I think a time will come when good Hindus will teach them a lesson.

You have been given police protection.

Yes, all the time. Now even in Mumbai.

I have received threats. [VHP Secretary General] Pravin Togadia has publicly threatened that he won't allow me to enter Gujarat. But one has to carry on.

What keeps you going?

I don't know. I feel that once I have started the battle I have to go through with it. It is very important that the justice process delivers justice. If there is a failure of justice for the riot victims, then there will be bitterness among people. This is not good and healthy for society in the long run.

After giving up journalism 10 years ago, do you think you have achieved your goal?

I have left mainstream journalism, but I am still a journalist. I left because I wanted to give quality time for these kinds of issues.

It has been a tough time for the last 10 years, but we kept on going. We have been overwhelmed with the kind of support we have got so far.

What is it like to be a Muslim in Gujarat right now?

You know, there is a growing perception among Muslims that they are being deliberately kept out of the system. The Crime Branch is terrorising young Muslims. They are humiliating them all the time. It is very unhealthy for society.

But the tragedy of Gujarat is that rapists and killers are roaming freely. This is like rubbing salt in your wounds all the time for the Muslim community. This is happening because the top man, Modi, does not believe in the Constitution of India. He does not believe in rule of law. He functions like an extra-constitutional authority. The way he speaks, the way he acts. The only thing he believes in democracy is elections. And the message that goes down is very dangerous to a pluralistic society like ours.

This is not true. We invited Taslima Nasreen, the Bangladeshi writer. We saw that she got a chance to speak at a public meeting. At least 10,000 people heard her. Our magazine, Communalism Combat, wrote for the first time what the Taliban was doing in Afghanistan. It was our cover story. Ours was the first South Asian magazine to point that out. No established media reported this from South Asia. On the Shah Bano case we have said that we need a uniform civil code.

These things are all against the Muslim community. So we oppose Muslim communalism all the time, but people only see what they want to see. We are not like [Deputy Prime Minister L K] Advani who has changed his avatar by wearing green now.