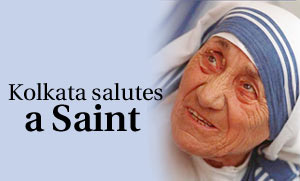 She gave shelter to dying destitutes, a refuge to abandoned babies. Discarded lives found solace in the warmth she radiated. She faced criticism for highlighting poverty and tarnishing the image of Kolkata. Undeterred, Mother Teresa and her band of blue-bordered sariclad sisters continued to strive: To serve the poorest of the poor.

A year after her death in 1997, then Archbishop of Calcutta Henry D'Souza first raised the issue of sainthood. He wrote to Rome asking for permission to start the process. It was refused. According to the rules of the Church the process could not be initiated for 5 years -- during this period it was presumed that the euphoria surrounding the personality would die down. Explains Archbishop Henry D'Souza, "After a year the Church had a change of heart. The Holy Father made an exemption because of the innumerable requests for Mother's beatification. I was asked to set up a commission of inquiry. For the process of beatification the life and virtue of the person should be exemplary and should give spiritual guidance and strength. Then the Church waits for a sign from God. A miracle is a sign from God. An event which cannot be explained by natural causes.'

Mother Teresa is just one 'miracle' away from sainthood.

Monica Besra, a resident of Nakore village in West Bengal's South Dinajpur district, is one such miracle case. In her mid-30s she suffered from stomach cancer. Eleven months of excruciating agony came to an end when she saw a blinding flash while looking at Mother Teresa's photograph during the first death anniversary prayer at Mother's home in Patiram village, about 100 kilometers away from where she stayed. Fatigued, she fell asleep. When she woke up her swollen stomach had disappeared, the pain forgotten. Sceptics view it with suspicion but for Monica, Mother Teresa is a saint, her saviour.

Like Monica, there are many many others who say they owe a new lease of life to Mother Teresa. A school teacher in Calcutta, R C Vincent says his agonising back pain was diagnosed as 90% cancer, "My wife and I prayed to Mother. She took away my pain and I was healed."

On the eve of her beatification, Kolkata fondly remembers its Angel of Mercy. For those who knew her, she has always been a saint.

Father Pat Eaton, who was closely associated with Mother Teresa, says, "Canonisation is a concept of the Western Church. Even before the whole process started people revered Mother as a saint. She has a tomb in Calcutta and every day people are going to Mother House to pray, to ask for her blessings." There is one quality of Mother Teresa that always impressed him. "Even though she was a world figure dealing with so many people when you were in front of her you were the centre of her attention. It was never that she was mechanically dealing with people one after another. There is a certain Sister who started a project in Calcutta and she was living in a small house, three in a bed as it were. Her arm was always grazing against the wall as it was a small house and a small bed. She would go to Mother House for Mass every morning. One day Mother called her and said, 'You know Sister, I have noticed how for over a month you are wearing that band-aid. Why is that band-aid there? What is the problem?' And this actually started a whole process by which eventually a Sister got her own place and her own accommodation. But it just showsyou know there are so many foreigners coming for Massfrom Japan, from Europe, from all over the world. And Mother notices one simple Sister who has a band-aid and she takes the initiative to call her and ask her what her problem was. This was an amazing characteristic of Mother Teresa. She could focus on you and you were the centre of her attention."

Memories of Mother Teresa light up Sister Marjorie's face as she recalls her first encounter more than 10 years ago. "The first time I met her she was so tender and loving. And then she said . 'What do you plan to do?' I said, 'I plan to join you in a few years.' 'Few years?' she said, 'You come immediately.' That was Mother. Everything was immediate. She didn't wait for years."

Sister Marjorie, then a teacher at the Convent of Jesus and Mary in Pune, put in her resignation and joined the Missionaries of Charity. In charge of the children's home Shishu Bhavan, Sister Marjorie enjoys holding the children in her arms and singing to them. " I always wanted to have a big family. And slowly I found that God was calling me to serve him. So I said Yes and he fulfilled that great desire of mine to have so many children. I am so happy that Mother entrusted this work to me."

Mother Teresa probably sensed Sister Marjorie's overwhelming love for children. A love Mother Teresa too shared. Vociferously against abortion, she would urge women, 'You keep your heart clean from the killing of your child. Give me your child and I will give the child to a family that will take care and love the child.' Mother Teresa constantly showed the way. She taught the nuns to tenderly touch the maggot-infested, disease-ridden bodies that came for help. Sister Andrea, the first non-Indian nun to join the Missionaries of Charity, says, "Mother used to say whatever we do to any of his people you must in your touch show the respect that you would show to God Almighty. For us, this is the broken body of Jesus. So that was our inspiration. Even when Mother put me with the leprosy patients, She had a motto: Touch the leper with your compassion."

She read about Mother Teresa and her group who worked in slums and served the poorest of the poor in a Catholic magazine in Germany. "I just felt this was what God wanted me to do with my life. So I wrote to Mother I didn't know where to write. So I just wrote Mother Teresa, Calcutta. This was in 1958. She wasn't a world figure then. But you know when God wants something, it'll happen. My letter reached. Mother replied, 'Come.' "

Today hundreds of volunteers from different countries come to Kolkata each year to work at Mother Teresa's different homes: with dying destitutes, orphans, leprosy victims. They say they go back home with much more than what they gave. This experience gives a deeper meaning to their lives. The bliss of bringing a smile to the faces of those breathing their last. The joy of seeing them recover from a state of hopelessness.

Eva Kleekamm, a volunteer from Germany, who gave up her 12-year-old job with a bank to do something more meaningful, works at Nirmal Hriday in Kalighat, the home for dying destitutes often referred to as Mother's first love. She has been here for three-and-a-half years and has a visa till 2007. "Take the case of Pushpa in bed number five. She was on the verge of dying at least four times and every time we thought it was the end. She was sitting in bed and smiling at us. When I went for my two-month holiday, I just thought to myself. I will never see her again. Now just see. She's cleaning up her bed on her own, she's dressing up herself. And I would call that a miracle. Someone almost stops breathing and then they are alive again."

Inspired by Mother Teresa, volunteers take a break from the hustle-bustle of their daily lives. Anne Guery, a philosophy student from Paris, says, "I had a two-week break and wanted to work among dying destitutes. This work here exposes us to suffering, to death. It brings us closer to God." They return home stronger and armed with Mother Teresa's guiding force: To do ordinary things with extraordinary love.

Sunita Kumar, co-worker and the official spokesperson for the Missionaries of Charity, first met Mother in the mid-sixties. She treasures memories of Mother Teresa's radiant smile, the warmth of her hands, the strength her presence exuded. She narrates an incident that has left an indelible imprint on her mind. "This was during the Bangladesh War. Mother called up and asked if I would come with her to the border. I was pretty scared and not sure if I would be able to face the situation. Mother always gave us strength and my husband and I both decided to go with her. There was a young mother with a dead baby in her arms. She was hysterical and was throwing herself in a drain. She just could not accept the loss of the baby. She had gone crazy with grief. Mother walked up to her. Gently picked her out of the drain, touched her with tenderness, consoled her and slowly a calm descended on her. The lady was suddenly at peace. It was amazing to see that sort of thing happening. There was something in Mother definitely."

Providing solace was second nature to Mother Teresa. "Her love for the poor was very special," says Sister Georgina. "Mother always welcomed everybody with the same love. When a rich person came to Mother for her blessings she would come out and give them blessings and say a few words to them and when a very poor person came, Mother would do the same. All were children of God to her. All were children of one loving father." Artist Ritu Singh, who knew Mother Teresa for over 40 years, is one of the many who have traveled from Kolkata to witness Sunday's beatification ceremony at the Vatican. She vividly remembers the day in 1979 when Mother Teresa won the Nobel Prize. "My mother and I were with Mother on that glorious day. Just after sunset, the bell rang furiously. I went to open the door. Hordes and hordes of people from the press with cameras were standing there. They all rushed in. Somebody put a mike in front of my face. And asked, 'What do you think of the wonderful news?' We had no clue. I asked him 'What news?' And he said, 'You don't know? Mother has got the Nobel Prize.!' We were overjoyed. Mother's reaction was as she always reacted. She folded her hands and thanked God. We are all rejoicing for her beatification. But for us she is already a saint. She is a goddess and we pray to her. As a matter of fact, I do and I have her in my temple."

A life dedicated to the service of the poor, while most of the world looked away. Completely immersed in chasing their own dreams. As a Kolkata resident Piali Dey says, " I think her whole life is one big miracle and a deity does not need to be deified, does she?"

But the Church has its reasons says Mother Teresa's successor Sister Nirmala, Superior General of the Missionaries of Charity who is now in the Vatican. "We have to go through this formality. This formality and the investigation that has taken place will prove historically that Mother is a saint. That Mother lived her live with extraordinary love."

While for the world Mother is just one step away from sainthood, for Kolkata she was always a saint.