News
Business
Movies
Sports
Cricket
Get Ahead
Money Tips
Shopping
Sign in  |  Create a Rediffmail account
Rediff.com  » News » Who are the Naxalites? 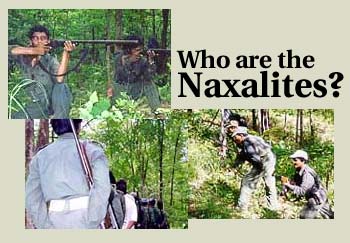 With Andhra Pradesh Chief Minister Nara Chandrababu narrowly escaping an attempt on his life on Wednesday, October 1, the spotlight is once again on the Naxalites, their ideology, and their violent movement. We present a brief primer:

The Naxalites, also sometimes called the Naxals, is a loose term used to define groups waging a violent struggle on behalf of landless labourers and tribal people against landlords and others. The Naxalites say they are fighting oppression and exploitation to create a classless society. Their opponents say the Naxalites are terrorists oppressing people in the name of a class war.

How many Naxalite groups are there?

Many groups operate under different names.  The Communist Party of India (Marxist-Leninist) is the political outfit that propagates the Naxalite ideology. There are front organisations and special outfits for specific groups such as the Indian People's Front.

The two main groups involved in violent activities, besides many factions and smaller outfits, are the People's War, the group many believe is responsible for the attempt on Naidu, and the Maoist Communist Centre.

Where do they operate?

The most prominent area of operation is a broad swathe across the very heartland of India, often considered the least developed area of this country. The Naxalites operate mostly in the rural and Adivasi areas, often out of the continuous jungles in these regions. Their operations are most prominent in (from North to South) Jharkhand, Chhattisgarh, Madhya Pradesh, eastern Maharashtra, the Telengana (northwestern) region of Andhra Pradesh, and western Orissa. It will be seen that these areas are all inland, from the coastline.

The People's War is active mainly in Andhra Pradesh, western Orissa and eastern Maharashtra while the Maoist Communist Centre is active in Bihar, Jharkhand and northern Chhattisgarh.

Who do they represent?

The Naxalites claim to represent the most oppressed people in India, those who are often left untouched by India's development and bypassed by the electoral process.  Invariably, they are the Adivasis, Dalits, and the poorest of the poor, who work as landless labourers for a pittance, often below India's mandated minimum wages.

The criticism against the Naxalites is that despite their ideology, they have over the years become just another terrorist outfit, extorting money from middle-level landowners (since rich landowners invariably buy protection), and worse, even extorting and dominating the lives of the Adivasis and villagers who they claim to represent in the name of providing justice.

Who do the Naxalites target?

Ideologically, the Naxalites claim they are against India as she exists currently. They believe that Indians are still to acquire freedom from hunger and deprivation and that the rich classes -- landlords, industrialists, traders, etc -- control the means of production. Their final aim is the overthrow of the present system, hence the targeting of politicians, police officers and men, forest contractors, etc.

At a more local level, the Naxalites have invariably targeted landlords in the villages, often claiming protection money from them. Naxalites have also been known to claim 'tax' from the Adivasis and landless farmers in areas where their writ runs more than that of the government.

When did this movement start? How did it get its name?

The earliest manifestation of the movement was the Telengana Struggle in July 1948 (100 years after the Paris Communes were first set up, coining the word Communist). This struggle was based on the ideology of China's Mao Zedong, with the aim of creating an Indian revolution. Not surprisingly, the ideology remains strong in this region of Andhra Pradesh.

On May 25, 1967, in Naxalbari village in Darjeeling district, northern West Bengal, local goons attacked a tribal who had been given land by the courts under the tenancy laws. In retaliation, the tribals attacked landlords and claimed the land. From this 'Naxalbari Uprising' came the word Naxalite.

Was it ever popular?

In the late 1960s and early 1970s, the Naxalite movement was popular. There were reports of brilliant students, including from the famed IITs, dropping out of college to join the struggle for the rights of the tribals and landless labourers. But as has been the case with many movements set up with high principles, over the years the Naxalite movement is seen as having lost its vision and having compromised its principles. Nevertheless, the fact that it has an endless supply of men and women joining its ranks shows that many still believe in its cause.

Do the Naxalites face much opposition?

Yes they do, almost from the entire Indian political spectrum. Noticeably, when the Naxalite movement first started in the late sixties in West Bengal, it was the CPI-M that cracked down hardest on the Maoist rebels, with ample support from the Congress at the Centre. At village levels, the Naxalites' terror tactics have spawned local armies to provide protection to the landlords and others. The most infamous of these is the Ranvir Sena in Bihar and Jharkhand, formed by Bhumihar caste landlords, which kill tribals, Dalits and landless labourers either in retaliation or to enforce their domination.

Karl and the Kalashnikov

'All revolutionary ranks must unite'

'We expect a lot of violence this time'

History of the Naxalite Movement

Naxalbari Movement: The fire that was

A K Diwanji in Mumbai
Print this article