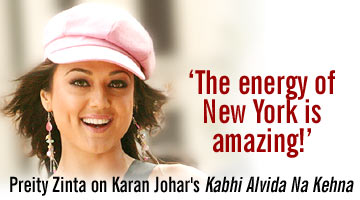 A month ago walking in Times Square late in the evening, I saw an unusual number of desis hanging outside the Air Force Recruitment Center, between Broadway and Seventh Avenue. A closer look revealed it was a Bollywood film crew with the tall and handsome Akshay Kumar rehearsing a scene with an actress who first appeared to be a young starlet.

"That's Preity Zinta," said a friend who I spotted in the crew. Indeed that was Zinta, looking fresh and radiant as always; her face glowing with her charming smile as she waved at dozens of desis who had turned up to see the shoot. She was dressed in a blue print dress, with a grey cotton jacket tied around her waist and high platform heels.

I then realised that I had walked into the shoot of Janeman, the directorial debut of Shirish Kunder. Janeman's third Bollywood star, Salman Khan, was not at the shoot that evening.

I narrate this story to Zinta as we talk on the phone while she is on a quick lunch break from Karan Johar's Kabhi Alvida Na Kahna  the second film she is working on this fall in New York City. The movie is being referred to in different ways  KANK in the tradition of Johar's K3G; Kaink by some of the film's American extras as they try and pronounce KANK; and my favourite -- simply Kabhi Alvida by Zinta herself.

In the past month, there have been several sightings of the cast of Kabhi Alvida and Janeman in New York City -- from Salman Khan on the Brooklyn Bridge, to Shah Rukh Khan and Rani Mukerji in Bryant Park and Grand Central Station. And last week, I saw the tall Arjun Rampal standing outside the Radisson Hotel in midtown Manhattan.

So I ask Zinta where she is shooting Kabhi Alvida today.

"Oh in some forest outside New Jersey," she says. "I have no idea about today's location. We drove an hour and a half outside Manhattan."

Later, a source reveals that the shoot was at Bear Mountain, a tourist spot, located west of Hudson River, and an hour and a half away from Manhattan, on the edge of New Jersey. But it is a cold, cloudy day  the same day Hurricane Wilma is pounding heavy rains and winds over the entire state of Florida.

"Yes, it is cold, but well, we have our overcoats," Zinta says with a slight laugh. "We are good sports so it is not a problem."

Zinta has finished the American schedule of Janeman and since then, moved right into Kabhi Alvida. She expects to stay in New York until the end of November and one source reveals that Kabhi Alvida's shoot will continue until mid-December. It has been a busy schedule for Zinta.

"It's not a vacation," she says emphatically. "Work and vacation are two very different things."

Zinta is unsure about how the crew and she will mark Diwali on Tuesday. "Well, since there are no fire crackers and nothing happening, I think we will be working on Diwali," she says, adding that she is not aware of any Diwali party plans among the Kabhi Alvida team.

"We just work and this crew is a wonderful crew. So it is great to be with everybody here. It is a party everyday. I don't think there is going to be a special party for Diwali. The rain has been quite bad and we are a little delayed in the shoot."

Next week is also Shah Rukh Khan's 40th birthday. Zinta remains equally non-committal about plans to mark the milestone in Khan's life. "Well, I will find out," she says. "I am sure something will be planned."

Perhaps a surprise birthday party for Bollywood's number one star?

"As of now nothing, but if it is a surprise then I am not going to tell you," she laughs.

Two years ago, Zinta came to New York to shoot Kal Ho Naa Ho for Johar's production company. Now, she is working on her second and third films in New York.

"It is a beautiful city," she says stating the oft repeated descriptions about New York. "It is one of my favourite cities in the world. It's a city that never sleeps. It is amazing to be in New York."

So does that mean that Zinta and her colleagues are out partying every night?

"We sleep but the city is always buzzing and wide awake," she adds.

Zinta notes the differences in film shooting in New York and Mumbai. "[In] Bombay, we have the studios," she says. "Everything is our own. Our country is our own and you don't have problems with permissions. Everybody knows what's happening.

"Out here, it's a different ball game altogether," she adds. "But the excitement of working in New York, the energy of the city is amazing."

She says that New Yorkers walking on city's sidewalks are quite accepting of an Indian film crew. "People are pretty cued in now," she says. "Everybody more or less knows what Bollywood is, what the Indian film industry is. There is a huge amount of awareness about our industry."

So what does Zinta do for fun in New York? Her response is muted. She likes to go out and eat, but during this trip she has not checked out the social scene.

"We have been having very long days and we have been busy," she says. "Whenever we have time off, we go do our own thing. We start early morning and to get up [early], you have to sleep early. So when we come back from work, we have dinner and go to sleep.

Shopping has not interested her, because stores are mostly selling winter clothings. But Zinta has been able to find time to go to the gym and even watch a few movies.

"I saw Domino, Flight Plan and In Her Shoes," she says rattling off names of the current Hollywood films playing in the city.

Did she like Domino  given the fact that the film has been criticised for its excessive violence? "Yeah, it was okay, it was intense."

There are other movies she would like to see before she leaves for Mumbai. "But you know when you are shooting a movie your whole life is just the movie. It is very tough to do the social thing and other stuff. It doesn't happen even when we are shooting in Bombay."