News
Business
Movies
Sports
Cricket
Get Ahead
Money Tips
Shopping
Sign in  |  Create a Rediffmail account
Rediff.com  » Movies » Mr Ya Miss: An apology of a film

Mr Ya Miss: An apology of a film 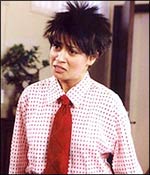 None can question actress Antara Mali's thoroughness. Two years ago, she expressed her desire to be Bollywood's next Madhuri Dixit (Main Madhuri Dixit Banna Chahti Hoon), and wowed everyone with a scintillating performance.

Now, she takes a different stance, this time behind the camera, as director of a Ram Gopal Varma production, Mr Ya Miss. She also writes the script.

Sadly, despite the hype, she fails on both counts.

Supposedly inspired by the Hollywood production Hot Chick, the film fails miserably to emerge even as a poor copy (It's not as if I liked the Hollywood version much either.)

Based on a fantasy, Mr Ya Miss portrays, or attempts to portray, a man's predicament when he is reborn as a woman. Sanjay Patel (Aftab Shivdasani) is a philanderer to the core who thinks every woman is a little pretty thing waiting to be 'savoured' and exploited. He double times a host of girlfriends and shrugs off being caught without batting an eyelid.

Sanjay isn't particularly lucky on one particular occasion though, when an enraged date strikes him hard on the head. Off he goes -- to heaven -- to meet Lord Shiva and Parvati (Since when did they gain custody of the dead? I always thought it was Chitragupta who handled affairs of the soul).

The gods can send Sanjay to hell but, after checking his records, feel he should be given a second chance to behave himself instead. As if to test his endurance, they send him back to earth. Only this time, he's a woman -- Sanjana (Antara Mali).

What follows thereafter is an illogical, rather ludicrous set of events that even has Sanjay's best friend Sekhar (Ritesh Deshmukh) falling for Sanjana. Enough of tomfoolery, you say? The actor-director seems undeterred. She goes as far as having Sekhar impregnate Sanjana and even sends her to jail for the alleged murder of Sanjay.

Phew! What a plot, you say. Only an intelligent execution can come to its rescue. But that calls for a clean, taut script. Instead, what you get is a series of weak, ineffective dialogues loosely strung and punctuated by forgettable performances. Mr Ya Miss could have done a fair business as a slapstick TV soap on any B-grade channel, but you just can't afford to see it on the big screen.

Antara's poor show comes as a big surprise, especially to those who loved her in Main Madhuri. Who on earth told her that a permanent grimace and jerky swagger would lend her a tomboyish look? And that constant attempt to brush aside her unruly mane? Ugh! As Antara parades down the road, unable to manage her high heels, she is an ugly picture of discomfort and does not even generate pathos, let alone laughter. 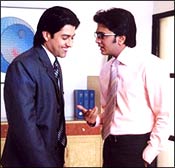 Aftab manages to put in his best in a not-so-significant role, whereas Ritesh Deshmukh and Divya Dutt perform their respective tasks satisfactorily. The film's cinematography appears neat but the music (especially the use of James Bond's signature tune at odd places) seems pathetically incongruous.

Sitting through it all was, frankly, an ordeal. The 50-odd members of the audience, who watched the film with me, would agree.

An apology of a film, Mr Ya Miss proves once again that not every good actor can be a good director. Direction is not everyone's cup of tea. Comedy, Ms Mali, is serious business. It's time you realised that.