Kamal Haasan launches yet another film! 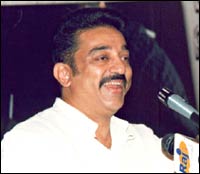 Kamal Haasan, the actor, has to be saluted. His passion for films -- a passion that almost borders on obsession -- is unparalleled. For months, he has been working relentlessly on his new film, Mumbai Xpress: writing the script, acting and producing it.

Although it is an out and out comedy, Kamal's film ran into trouble from the day it was titled. The self-professed fanatical lovers of the Tamil language tried to intimidate him into changing the 'English title' for the film.

It was another bunch of fanatics who made him change the title of his last film from Sandiyar to Virumaandi. But this time, Kamal did not budge. Nobody had the authority to intrude the creative freedom of an artist, he loudly proclaimed.

His troubles did not end with the title. The Censor Board made him delete an entire song -- the title song -- he had shot with siren Raakhi Sawant, she from the Mohabbat Hai Mirchi 'item number' from the Bollywood movie, Chura Liya Hai Tumne.

Another actor would have taken a vacation after the film hit the marquee. But not Kamal Haasan. He went ahead and launched a new film, Vettayadu Vilayadu.

The award for the worst-dressed man for the day would go to actor Surya. He and Jyothika were the lead pair in Menon's last film, Kaakha Kaakha, the film that made the young director a name to reckon with in the South Indian film industry.

Music director Harris Jayaraj arrived with his family. His music from Kaakha Kaakha is still a craze. He was touted as the successor to A R Rahman, but Jayaraj could not repeat the Kaakha Kaakha magic in his next films.

When Haasan arrived, after receiving the customary bouquet on the dais, it was time to light the lamp. Kamal does not believe in rituals, but he obliged. There were quite a few people to light the lamp, including Surya, the only person to remove his shoes before lighting it. 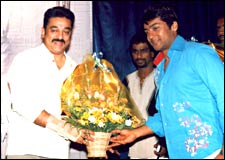 Menon talked about watching Nayakan when he was in 10th standard and not sleeping for two days.

Vijayakanth recalled what a great actor Kamal was, as he was fortunate enough to act under directors of three generations.

Kamal ridiculed those who wanted Mumbai Xpress' name changed. "I thought I would not have any trouble when I decided to make a full length comedy but that was not to be. We also love our language like everybody else, otherwise, why would we be making films in Tamil?

You said it was your dream to direct a film with Kamal Haasan ever since you saw Nayakan as a schoolkid. How did this dream come true?

After Kaakha Kaakha, Madan of Vijay TV told me, 'You should do a film with Kamal. I will introduce you to him, and if you have a script, show him.' So we met up and I told him that I would like to do a film with him. Kamal agreed -- if I had a good, bound script. I said I would take my time and come back to him.

Had he seen your film Kaakha Kaakha then?

Yes, and he had liked it very much. That is why he agreed to meet me.

Six months after our meeting, I met him with an idea. He liked the idea, but did not approve (it). He wanted me to work on more ideas. After a while, I suggested this idea to him. And, he agreed to go ahead with it. It is an action movie. 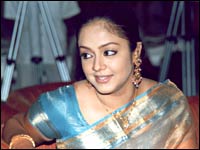 Yes and no. The pattern will be different. Kaakha Kaakha had lots of songs and love. But this will be a commercial action film, but a very serious one. It is about the hunt for a killer. And Kamal plays a cop.

What is vilayadu in the film?

The film starts with the hunt for the killer. He (Kamal) is not somebody who hunts under pressure. He is not scared. He is a person who handles the hunt casually. Even when a lot of things happen, his attitude is cool. He doesn't crib or worry about his job. How he handles the hunt in style is the idea of the film.

Why a film based on a cop again? Even Kaakha Kaakha was a cop film.

I suggested a lot of ideas to Kamal, and this is the one he liked. Only after that the cop aspect came into the picture. The idea required him to be somebody who can go to another place and investigate a murder.

Rumour mills say Kamal interferes in the direction of all his films. Are you scared?

I have given him a bound script. It will have everything in it, dialogues and action and treatment. What the audience will see onscreen will be there in the script. If Kamal sir finds a problem with some scene, I will take his suggestion because he is an experienced person. All that he has done so far is brilliant. He is sensible. I am willing to listen to him, and also willing to argue with him.

Will you be in awe of him when you direct him?

No. But I like the man very much. I like his work. I know all his expressions. I know how he will react to a particular scene. I want to try and portray something different here. I am going to ask him to give me something more every time.

When will you start shooting?

We will start in May, (and shoot) up to July. It will be over in one stretch, and we will release the film on September 15.

We will start shooting in New York and the second half will be shot in Chennai, Hyderabad and Mumbai. 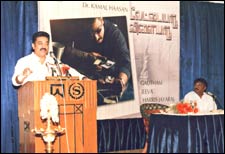 What is Jyothika's role in an action film?

Jo is a very good actress and human being. She's very comfortable to work with. She knows Tamil. I have a very good rapport with her. Kamal sir also said that he had done one film with her, and that he would love to do another with her.

Is Surya disappointed that he has no role in this film?

The role will not suit Surya. It requires a man who is about 40. I am doing a film with Surya later in December, called Chennayil Mazhakalam.

So your dream to direct Kamal Haasan has come true very soon in your career.

Yes. Actually, Shankar also got a chance to direct Kamal in his third film, and this is my third film in Tamil. Hope it will be a hit like Indian!