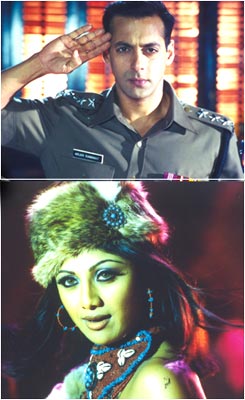 His emotionally charged performance in Tere Naam translated into good reviews and a good run at the box office.

Even the Amitabh Bachchan-Hema Malini family drama, Baghban, where he had a guest appearance, turned out to be a hit.

Now he is back with Garv - Pride and Honour. Directed by debutant Puneet Issar, the cop drama also features Shilpa Shetty, Arbaaz Khan and Amrish Puri.

After Khakee and Ab Tak Chhappan, Garv, too, revolves around the workings of a police department.

This is not the first time Khan's sporting khaki. He played a young police officer in Anant Balani's Patthar Ke Phool.

Shilpa Shetty, who has been keeping a low profile, is back in action with Garv. The promos show the actress shake a leg and show skin in the racy track Dum mast mast.

Garv - Pride and Honour is tentatively scheduled for a June 25 release.

Don't miss:
The Garv music review
Salman Khan: I am a man now

It's Tharoor vs Kharge in battle for top Congress post

All you need to know about India's new CDS Gen Chauhan