Robert Palmer will be missed

Some found him simply irresistible. Others can only remember the women who sashayed about in his music videos.

But Robert Palmer will be missed.

The British rock singer, known equally for his crisp suits and hit singles, died in Paris of a heart attack on September 26, his manager said. The French police confirmed that Palmer died in his hotel room near the Champs Elysees in central Paris. Palmer, 54, had been living in Switzerland for the past 16 years. He was on a two-day break in Paris following a television recording session in Britain.

Palmer was the star of another age, when raunchiness was an art form -- blasé, yet subtle. In the 1980s, his music video for Simply irresistible (1988) drew attention for its sassy models with slicked back hair and pouting bright red lips. And who can forget the miniskirts in the 1986 hit Addicted to love? Both won Grammys for best rock vocal performance.

Born Alan Palmer on January 19, 1949, in Yorkshire, he was the son of a British naval officer and lived in Malta for most of his childhood. He was 19 when he returned to Britain and played with the Alan Bown Set before joining the group Dada, which changed its name to Vinegar Joe. He recorded three albums with Joe including Rock 'n' Roll Gypsies (1973). In 1974, his solo career took off with the release of Sneakin' Sally Through The Alley.

In 1985, he formed Power Station, a side project with Duran Duran stars Andy Taylor and John Taylor, and turned out US chart toppers like Communication and Get it on.

He once confessed he was not attracted to stardom. 'I loved the music, but the excesses of rock 'n' roll never really appealed to me at all,' he told Rolling Stone.

Palmer released Drive, his 14th album, in May. 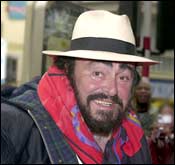 In fact, he feels young enough to marry.

The Italy-born opera tenor, who turns 69 next month, announced his intentions to marry his 30-something companion and former secretary Nicoletta Mantovani during a recording of CNN's Larry King Live on September 24.

Pavarotti, who lives in New York, has three daughters Lorenza, Cristina and Guilina from his first marriage to Adua Veroni, a schoolteacher who later assisted him in his career. They separated seven years ago. Mantovani, who has been living with him since 1996, is the mother of his youngest child Alice.

Perhaps it's never too late to hit a high note.