They have gathered more moss than any other band in the world, but the four rock-solid Stones have got together to turn another page. And not from their chequebooks either.

, Keith Richards, Charlie Watts and Ronnie Wood reveal the inside story about the history of the band in According To The Rolling Stones, a recently released book. The story starts with their beginnings in the south of England and their early failures and successes.

According To The Rolling Stones

includes interviews conducted during the band's Forty Licks tour between November 2002 and May this year. Jagger said he and his bandmates reminisced about old times during the interviews, and discussed 'aspects of the band's career that we haven't really talked about.'

Wonder what an old Stone named Bill Wyman has to say about that! 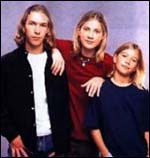 Remember MMMBop? The 1997 hit helped launch a band of three teen brothers to the Grammy mainstage, all with the last name Hanson. It also launched the boy band craze of the late 1990s.

Hanson will play at New York's prestigious Carnegie Hall on November 5, on the last leg of their acoustic tour.

Siblings Isaac, Taylor and Zac, now 22, 20 and 17 respectively, were nominated for three Grammys in 1998, including Record Of The Year and Best New Artist.

The trio began their Acoustic '03 tour on August 9. They plan to release their third studio album Underneath on their independent record label 3CG Records next year.

November 4: Sarah McLachlan will release her new CD Afterglow. The single Fallen is already on the airwaves. The singer recently criticised the music industry's pricing policy saying, 'The industry needs to listen to what the kids are saying. If they can't afford a CD, I don't blame them [for file-sharing]. Lower the damn price!' Afterglow is priced at a reasonable $12.99.

November 11: Pearl Jam, the grunge gods from Seattle, will release Lost Dogs, a double-CD collection of 31 rare unreleased tracks, and a double-disc DVD, Live At The Garden.

UP man arrested for threat to behead Nupur Sharma