With Pyaasa, Guru Dutt bade goodbye to the thrillers (Baazi, Jaal, Aar Paar) and comedies (Mr & Mrs 55) he had directed so far and let a dark cloud of pessimism hover over his professional, even personal, life. 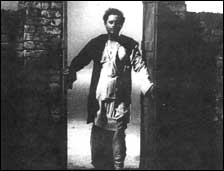 Pyaasa opens with a jobless poet Vijay (Guru Dutt) lying in the lap of Nature, which accepts him, unquestioning and non-judgemental.

The world he lives in, we soon see, is very different. Vijay is a talented writer, but the world has yet to wake up to his stark, stirring poetry. He is treated with contempt by publishers. His mercenary brothers evict him from his house when he chides them for selling off his nazms (poems) to a raddiwala (junk and wastepaper dealer).

While tracking down his poems, Vijay encounters streetwalker Gulab (Waheeda Rehman). After an initial skirmish, Gulab develops a soft spot for Vijay. In a bid to distract himself, Vijay attends his college reunion. Unwittingly, he finds himself face to face with Meena (Mala Sinha), his college sweetheart. The scars of her betrayal are still fresh.

Meena, about whom he later says, 'Apne shauk ke liye pyaar karti hai aur apne aaram ke liye pyar bechti hai [Love, for her, is a hobby that she can barter for material pleasures],' left Vijay for a life of comfort with Ghosh (Rehman), a flourishing publisher.

Ghosh, Meena's escort to the college function, instinctively realises Vijay is a ghost from her past. Consumed by jealousy and itching to belittle him, Ghosh employs Vijay as a clerk in his publishing house. Sadistically, he refuses to publish Vijay's poems. During a mehfil organised at Ghosh's house, Vijay is asked to serve drinks to the guests. Meena is unable to contain her tears. The hawk-eyed Ghosh's worst suspicions are confirmed.

Ghosh is further incensed when he bursts in on a meeting between Vijay and Meena, which she initiates. In a bid to punish his wife, Ghosh sacks Vijay.

Aimless, Vijay offers his coat to a beggar. When the beggar dies in a train accident, the coat he is wearing leads to the assumption that Vijay has been killed.

A crestfallen Gulab pools her meagre resources and convinces Ghosh to publish Vijay's work posthumously. Vijay, rendered speechless after witnessing the beggar's death, regains his voice when he sees his book of poems. But the doctors attending to him pronounce him insane (how can he be the dead poet?) and confine him to a mental asylum.

Ghosh, abetted by Vijay's best friend and avaricious brothers, refutes Vijay's claim that he is the poet.

Vijay escapes from the asylum and, ironically, attends his own death anniversary gathering. A disillusioned man, he lets his identity be known -- only to deny it subsequently. Having seen the emotional grime behind the glory, he doesn't want to sully his soul with it.

In a telling climax, an excitable and disbelieving Meena urges Vijay to think with his head instead of his heart and embrace success, while Gulab unquestioningly sets off on a journey to anonymity and, hopefully, accompanying inner peace, with Vijay.

Pyaasa works at two levels simultaneously -- it is an entertainer with an absorbing story as well as a cauterising comment on the commodification of people in the quest for success, money, and power.

While cineastes respond to Dutt's philosophy and technical bravura, the layman is enamoured by Dutt's knack for storytelling.

Each time I see this film on the eternal struggle between man's materialistic and spiritual quest, I am struck by some new facet that had escaped me earlier. The last time I saw it, I was enamoured by the song situations (Jaane kya tune kahi, in which Waheeda entices Guru Dutt through the winding streets of Kolkata) and the use of symbolism, underlined by the crucifixion-like pose that Guru Dutt strikes during the song Yeh duniya agar mil bhi jaaye toh kya hai.

This time, I noticed a clever juxtaposition of two scenes. In one, Rehman notices his wife Mala Sinha conferring with her ex-lover and angrily belittles her by comparing her to a wanton woman.

Cut to the very next scene. Waheeda, a streetwalker who has a policeman on her heels, takes refuge in Guru Dutt's arms. When the policeman wants to know her identity, Guru Dutt calls her his wife.

By placing these scenes one after the other, Guru Dutt underlines the fact that a man's view of a woman is a mirror to his character -- one man sees the woman as an object of vilification while another sees her as a fellow human being worthy of empathy.

Abrar Alvi's dialogue has scathing wisdom and his wit has bite.

When one views Pyaasa today, one is not sure if Guru Dutt is performing or only baring his acutely sensitive soul.

Waheeda Rehman, as the golden-hearted prostitute, has the more audience-friendly role among the heroines and makes the most of it. Ironically, Gulab, a character who has every reason to despair, is the only ray of hope in the dismal world that Guru Dutt plunges both his character and us in.

Mala Sinha has the more difficult role. She essays it with understatement, a trait she seemed to reserve only for special films like Pyaasa and Phir Subah Hogi. She looks ethereal and transmutes the conflict of a woman torn between her materialistic aspirations and the calling of her heart with a haunted glance, a lowering of her eyes, or a faraway gaze.

Rehman projects both the regal bearing of a shrewd, flourishing publisher as well as the insecurity of a possessive husband corroded by envy.

* Pyaasa was to be made with Nargis and Madhubala in the roles Mala Sinha and Waheeda Rehman played eventually. But the two actresses couldn't decide which role they wanted to play and Guru Dutt eventually opted for two then new actresses, Mala and Waheeda.

* In keeping with the tradition of Guru Dutt films, Johnny Walker had a hit, Sar jo tera chakraye, picturised on him.

* Pyaasa marked the last collaboration of the long-lasting team of S D Burman and Sahir Ludhianvi. But it was arguably their finest hour together.

Stood up against injustice, not revolted: Shinde