Indian economy: Nothing much to cheer

A 5.3 per cent GDP growth in Q3 of fiscal year 2008-09 seemed to have unnerved many people who were comforted by the recent release of the advance GDP estimate for 2008-09 by the Central Statistical Organisation (CSO), which pegged India's GDP growth to 7.1 per cent.

While the forecast was still lower than what we have been recording over the last few years, it instilled a false sense of comfort that India might still weather the storm better than many other countries.

Alas, the latest release dashed many a hope. The growth for the nine months taken together is 6.88 per cent and things are not expected to improve much from here.

Was it unexpected? Not really. As early as July-August 2008, in one of my articles I had mentioned that India would be struggling to achieve even a 7 per cent growth in the current financial year.

While my views were derided soundly as being too pessimistic, it unfortunately went the predicted way. And it wasn't too difficult a prediction, since it is quite clear that India has strongly under-achieved her reform potential.

In the first place, India's strong growth during the previous five years can be largely attributed strong global growth not due to any definitive reform. 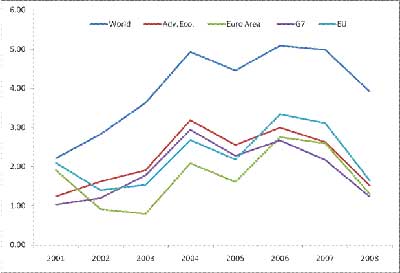 Like a tide lifts all the boats that come on its way, high global growth also lifted India's growth rate. Suddenly we started to believe that India's growth trajectory has changed, little realising that the huge amount of credit sloshing around the world acted as a steroid as it rushed towards India in its effort to earn that extra return that the India story promised.

Now that the global credit growth has been halted on its tracks and the flow has dried down to a trickle, the Indian economy is feeling the pain. And how?

With agriculture contracting, industry slowing down and exports desperately looking for a lifeline, the paradigm seemed to have changed suddenly. The service sector is still pulling the economy up, but for how long is the question, especially on the face of falling agriculture and industry.

And, this is not surprising. In reality, India's list of policy successes has been short. Very short, if we take away policies arising out of India's reaction to various crises.

The CAGR (compound annual growth rate) of food grain production has fallen from 3.1 per cent during the 1980s to a mere 1.1 per cent in the 1990s. What is important to note is that this annual growth has been less than the population growth during this period. Till 2006-2007, the situation has hardly improved.

The deceleration, since 1996-97, has been mainly due to sharp decline in usage of critical inputs like technology usage, irrigation, fertiliser and electricity consumption. Not surprisingly, agricultural productivity had been a casualty in India.

Paradoxically, our response has been falling investment in agriculture.

For a country, nearly 65 per cent of whose population depend on agriculture and nearly 20 per cent of the country's GDP comes from agriculture, a 5.8 per cent share of agriculture in gross capital formation (lowest ever share recorded) is nothing less than criminal.

Similarly we have hardly seen any reform worth the while in the area of labour market, judiciary and public administration, etc.

The state of our physical infrastructure continues to be a headache. Agreed some progress is being made, but with the pace of our progress being slower than our requirement, it continues to be inadequate. The mind-boggling progress made by China in this space reminds us of our inadequacy.

The list can be long. All of these, however, are a testament to our policymaker's sheer inertia to take the economy to the next level. Hence, while they continue to sound optimistic to mask their inadequacy, the overwhelming data shows them in poor light.

Clearly, India is ill-equipped to buck the global trend and charter her own course. And, as the global economy sags, India will continue to experience more pain.

Will the stimulus packages that have been announced help? Somewhat, but in the long run. All the reduced indirect taxes, increased availability of credit and reduced interest rates are hardly going to impact much in the short run. This is mainly for two reasons The willingness of banks and financial institutions to lend (and thereby boost economic activity) is possibly at its all time low

Secondly, expectations are playing a major role. With mind numbing unemployment numbers and general lack of trust about where the economy is heading, domestic demand is unlikely to pick-up anytime soon as consumers choose to play safe. Not only that, there are tell tale signs of investment tapering off.

What is required is true blue Keynesianism i.e. substantially increased government expenditure that can create more employment. In this context, it is important to remember that the service sector that propped up the Q3 GDP growth consisted of 17.3 per cent growth in social sector spending, which includes the impact of the Sixth-pay commission and the National Rural Employment Guarantee Scheme (NREGS).

A mere tinkering of tax and reduction of interest rates are not going to help. These will only add to the deficit without doing much in the short term to boost demand. But that requires enough financial leeway for the government.

Sadly, it is currently lacking that firepower. As was mentioned in my last article, about 75 per cent of India's fiscal deficit is accounted for by revenue deficit, which means that only 25 per cent of governments borrowing can be used for productive purpose.

This is creating all the ground for potential rise in inflation as the economy starts to recover. The problem is likely to exacerbate as investment decisions are either being postponed or shelved all together leading to a likely supply-demand mismatch in the future.

To conclude, we should all brace for painful progress going forward. In all probability 2009 will hardly offer anything to cheer about, notwithstanding the stimulus packages. Thereafter, even if things improve, the specter of inflation will rear its ugly head.

The author is COH, Global Market Research, Infosys BPO Ltd. The views expressed here are solely those of the author.

After Puri's tweet, MHA says no flats for Rohingyas