By Arvind Subramanian
October 24, 2007 12:14 IST
This may not be evident but India has actually embarked on a very bold experiment in policy-making. In July, the government placed restrictions on foreign borrowings by domestic residents (ECBs).

Last week, the Securities and Exchange Board of India (Sebi) considered placing restrictions on some foreign portfolio inflows (the now infamous P-notes). The market response was swift and adverse: in one day, capital fled the country, the rupee dropped sharply in value, and stock prices plummeted, at one stage by enough for trading to be suspended.

The government, alarmed by this response, has given the impression that policy intent is in some limbo.

The experiment is fascinating not just because it is about macroeconomic and exchange rate policy, although that is important too. It is fascinating because it is about whether a developing country government that is not deemed fully trustworthy by capital markets can take restrictive policy actions, even moderate reversals, without fatally damaging its policy credibility or its market-friendly credentials.

Critics of moderating capital inflows - call them market fundamentalists - come from three directions. The reasoning of the first set goes something as follows: inflows are pouring in not just through the capital account but also through trade transactions; they cannot be stopped; so instead of thinking you can swim against the tide, just accept the inevitable and let go.

Letting go of capital controls almost necessarily implies letting go of the rupee as well because sterilisation with an open capital account, creates a one-way bet on the rupee and aggravates inflows, rendering it increasingly costly and ineffective.

Are these market fundamentalists willing to live with, and can the Indian growth engine afford, a rupee at, say, 35 or even 30 to the dollar in the near future?

Even leaving aside these untenable exchange rate consequences, the "controls are ineffective" position is not empirically substantiated. To see why, perform the following simple thought experiment.

Would the magnitude of capital inflows remain unaffected if India removed all existing capital controls - on ECBs, on portfolio inflows, and on inflows into domestic bond markets?

Indeed, during the period from 2006 to early 2007, ECBs increased sharply as ECB limits were eased, suggesting the flows remain sensitive to policy. To be sure, the effectiveness of controls will weaken over time, but they do buy some valuable time and policy space for the government.

In fact, given that other measures to address the problem of appreciation are either unavailable (fiscal policy) or have their own limitations (sterilisation), it is essential to use whatever tools can be feasibly deployed. So, if policy can affect flows, critics have to make an alternative case against this policy.

One such case - from the second set of critics - argues that this policy is undesirable because capital flows contribute to growth and development. But this position is simply unsupported by international evidence, which can be summarised as follows: in the aggregate, capital flows have no discernible effect on economic growth; some types of capital flows such as foreign direct investment are more likely to have positive consequences; and one of the main reasons why capital flows do not confer benefits is that they lead to exchange rate appreciation, which damages tradable goods industries (typically low-skilled manufacturing) in a country. What is important to stress here is that caution in liberalising inflows, and even moderate restrictions on inflows - especially on borrowings and "hot flows" - is as intellectually legitimate and respectable a policy position on this issue as market fundamentalism.

From a third quarter, however, comes another critique, apparently the most persuasive. These critics argue that recent attempts by India to re-impose capital controls will damage the country's reputation of being a market-friendly economy. Indian policy will lose credibility, which could be very damaging for India's economic prospects because it creates investor uncertainty, leading to loss of confidence.

But look closer at this critique and notice the implicit assumption. This heightened fear of market response is actually premised on market mindlessness. It assumes that markets assess government policies in a simple-minded fashion: restriction equals bad and market-unfriendly government, while liberalisation equals good and market-friendly government. And, indeed, by reacting swiftly and adversely, as on the day after the Sebi announcement, market participants tried to validate this assumption.

But Indian policy makers should have the confidence not to panic in the face of this reaction. Why so? In the case of the capital inflows-exchange rate problem, they should know that markets know: that there are many sound economic arguments for moderating inflows as the evidence mentioned earlier suggests; that the Indian government's choice to come down on the side of moderate restrictions, even if they involve a reversal from more liberal positions, is not irresponsible and market-unfriendly; that the imposition or re-imposition of moderate restrictions will not inevitably lead to a slippery slope of more restrictions in the future because future decisions will be made as responsibly as current ones have demonstrably been; and that the Indian government has a very good record of not expropriating investors either implicitly through inflation or explicitly through defaulting on repayment obligations so that restrictions in no way threaten the property rights of existing investors.

So, if there is one advice to give policy-makers on capital account issues it would be this: don't panic and retreat in the face of market reaction. While this may be understandable, it creates policy uncertainty and betrays lack of confidence in the government's policy-making ability and judgement. Retreat rather than the original policy choice will prove more damaging for policy credibility. Instead, policy-makers should continue to make choices based on the underlying merits and pursuant to the robust deliberative processes within India. If those choices entail some moderate restrictions on capital inflows, so be it. Markets will learn, sooner rather than later, that these restrictions could make for sound economic policy in the medium run. And in the short run, if market reaction leads to capital outflows, a decline in the rupee, and less froth in asset markets, well, that is just an added bonus.

Doctors India Should Be Proud Of 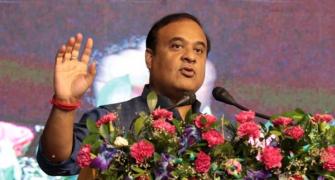 Rahul leaves meet in between, goes for jogging: Sarma