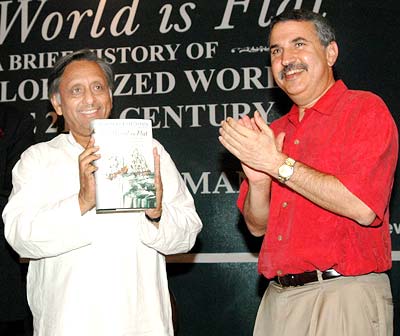 It was an evening when Union Minister for Petroleum Mani Shankar Aiyar stole the show from three-time Pulitzer Prize winner and The New York Times columnist Thomas L Friedman, and how!

The event was the launch of Friedman's latest book -- The World is Flat: A brief history of a Glocalized World in the 21st Century -- at the hands of Aiyar.

Friedman delivers his lectures like a nautanki performer. His speeches are always enthralling, engrossing and informative. More than anything else, he is always forward looking, like in his columns.

Friedman explained how he got the idea for the book -- detailing the growth of the newest of economic world orders -- from Nandan Nilekani, chief executive officer of Infosys Technologies.

Friedman recalled how, during a visit to Bangalore in 2004, Nilekani had told him that the global playing field was being levelled, and that the Americans were not ready for the transformation.

"What he was saying was that the global economic field was being flattened. He was telling me the world was flat."

In the book, Friedman argues that globalisation had come in three waves: the first when Columbus discovered America; the second, when the advent of multinational corporations made it 'small'; and finally, in 2000, when a combination of factors made it 'tiny'.

The turning point, he said, came with the fall of the Berlin wall, a symbolic event that allowed for increased collaboration across previously impenetrable borders.

Around then, the overflow of the huge funds pouring into the overheated Internet market funded the laying of undersea fibre optic cables.

"With the laying of the fibre optic cable, Bangalore, Beijing and Boston and Silicon Valley all become next door neighbours," Friedman said.

However, the new book seemed to have failed to impress Mani Shankar Aiyar. After launching it in India formally, the outspoken minister began: "I am afraid my world is very, very round."

He added, "Your book begins from a golf course at Banglore, but the constituency I represent has no golf courses."

He said he doesn't believe that total globalisation of the world economy has happened.

He said that "the issue of governance was at the heart of problems of globalisation and it will have to be overcome."

Hinting at the United States, Aiyar said that the quest for dominance of a few allies in globalisation will not help it.

He said neither the fall of the Berlin Wall nor the attack on the World Trade Centre was as defining a moment for Indians as it was for Americans. He said, "Terrorism has been at the back of the Indians' mind for many, many years before 9/11."

He asked, "In what way has the IT revolution in Banglore affected my constituency of  Mayiladuturai? Hardly!"

He said the IT revolution has not changed the lives of the 700 million poor of India. He said in his constituency people know about telephone booths because they call up their relatives in the Gulf and now a few television sets have come.

He also took a veiled dig at Friedman indirectly, saying, "It's a very peculiarly American view that globalisation began only when Columbus lost his way."

He said globalisation began several thousand years before Columbus. He said the Greek had a global empire, the Indus valley civilization like Harappa and Mohenjodaro had global connectivity with Iran's Sumer kingdom.

Centuries ago, the Chinese were popular in Italy and the Arabs had extended their influence Westward between the 7th and 12th centuries. Aiyar also said that the US had the nuclear capacity to destroy the whole world not once but 50 times over.

He asked the author whether he thought it necessary for the US to retain that capacity in a world without enemies?

Siddique Kappan walks out of jail after 'long fight'