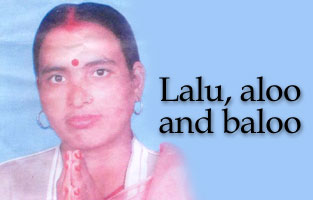 Aruna Devi is the wife of gangster Akhilesh Singh, who has numerous cases of murder and abduction against him.

She is a member of the Bihar legislative assembly and is seeking re-election on a Lok Janshakti Party ticket from Warsaliganj constituency in Nawada district, which is known for Lalu, aloo and baloo.

The first, of course, is the Rashtriya Janata Dal chief; the second refers to the healthy potato cultivation in the area; and baloo means sand, which is mined, among other places, along the route the Sakri River takes.

Her supporter Shailendra Kumar Singh, who is in the party office, says in a room heavy with the smell of ganja, the charges against Akhilesh are false, and he has not done anything. "Maan-samman ke liye awaz uthai thee unhone. Bihar has not seen a more corrupt and more unsuccessful government than that of Lalu Yadav."

He may be right. By all indications, when votes are counted, Aruna  who contested as an independent in 2000 -- may secure a second term.

Bihar: 'It's advantage NDA' | The killing fields of Bihar

AS is often the case, the victory may have nothing to do with the development work done by the legislator.

Development is something most people here have given up on. There is no electricity for most part of the day, the roads are in a shambles.

Aruna Devi is at a loss when asked what work she has done. She mumbles something and looks the other way. But she is sure to add that she will win.

Shailendra Kumar Singh says the most important thing is that she has maintained peace in the area. "Lalu sowed the seeds of hatred. We don't work along those lines. We are working for peace. Development will happen."

LALU Yadav may or may not be responsible for peace in the area, but Akhilesh Singh surely is.

Nasir Ahmad, sub-inspector, Warsaliganj police station, reels out the names of areas where the Akhilesh Singh gang has struck with deadly precision  10 people shot dead in Chakwai village on July 2, 2004 (Shailendra Singh Yadav, incidentally, is one of those the police accuse of being party to the massacre); seven people killed in Dariapur area on February 13, 2003. . .

Akhilesh Singh was in jail till a few months back. Ahmad says he procured a false bail release order and got out. He is now absconding.

Many people of his community  the upper class Bhumihars  know where he is, but they would rather die than squeak.

Apart from such massacres, he is said to be involved in many abductions.

There are 45 cases registered against him at Warsaliganj station, says Ahmad.

AKHILESH Singh has one rival in the area, Ashok Mahto, who has taken it upon himself to protect the rights of the downtrodden Koeri community.

He too is said to be involved in the massacre of many upper caste people in the area.

In fact, during her first term in the assembly, Aruna Devi lost her father Kailash Singh to gunshots. The killers were from Ashok Mahto's gang, say the police.

Mahto was also in jail. In 2001, he killed a guard and escaped, the police say, adding that many Koeris know where he is, but they protect him.

Caste affiliations are what matter most, with control of sand-mining operations and local business coming in a distant second.

LIKE Akhilesh Singh in the criminal sphere, his wife has one rival in the political sphere -- Ashok Mahto's friend Pradeep Mahto, a feared criminal with many murders and abductions to his credit. The police say their houses are next to each other.

Mahto is a guest of the state administration. He took an oath in front of the Nawada jail superintendent and handed over the signed nomination papers to supporters to submit them to the sub-divisional officer.

EXPECTEDLY, in this war, the losers are poor people.

"These two gangs fight for supremacy. The ones who get killed are innocent," according to Ahmad.

Vibhishan Prasad Singh, deputy leader of the panchayat at the Ramchandrapur Manjaur village nearby, says as much.

On what he wants, he says, "Nothing, just peace. The situation here is so bad that if we want to travel somewhere nearby, we need to think at least 10 times."

"A few days ago, I saw a crowd of people dragging two persons on a road not far from here. What could I do? Hum toh kaan pakde aur wahan se nikal gaye."

He says things are better in his village. "Across the railway, speak to people there. They are so scared that they do not sleep at night."