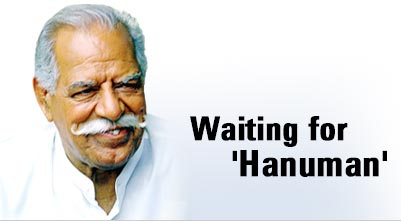 Dara Singh is expected to arrive in Bhopal on Thursday morning by the Tamil Nadu Express.

The wrestler, actor and now Rajya Sabha MP is traveling to Madhya Pradesh as one of the Bharatiya Janata Party's star campaigners.

The Karnataka Express rolls into Platform 1 at the Bhopal railway station. A few people get down. "Hum aap ko hi dhoond rahe the (I was looking for you)," says a familiar face with a smile. Medha Patkar hurries off, presumably for another Narmada Bachao Andolan meeting.

Outside the station a jeep flying the BJP flag and a car with the inevitable symbol of importance -- a red light atop it -- await Dara Singh's arrival. A few armed policemen are around; as if the man synonymous with the word pehelwan (wrestler) in India needs their protection :-) Chetan Singh, president of the BJP Yuva Morcha and leader of the welcoming party, gives his cadres instructions on what to do when the VIP arrives.

The Tamil Nadu Express' arrival is imminent, and the BJP workers troop into the station. One BJP activist informs us that Chetan Singh is in charge of four assembly constituencies in Bhopal and is good at his job. Another young man asks if Dara Singh will use a helicopter to campaign in the vast state. One worthy quips that the actor would probably put on his Hanuman attire -- Dara Singh's best known role in the last 20 years was playing Hanuman on television -- and travel from place to place. Both men laugh heartily.

The train arrives at 8 am. Everybody rushes towards the first class AC compartment. "Dara Singh?" asks one BJP worker. A man getting off says, "Not here, try at the back." The welcoming group rushes to the first class compartment. No Dara Singh here. They move to the three tier AC coach. Two young men with garlands charge down the platform at full speed. The garlands held high reveal their swift progress through the passengers alighting from the train. Others hurry in every possible direction. Everyone wants to be the first to spot the big man.

The enthusiasm eventually gives way to confusion, and then to despair. Everyone looks expectantly at Chetan Singh, who whips out a mobile phone and calls someone, presumably at the BJP's central headquarters at Ashoka Road in New Delhi. "I am Chetan Singh calling from the Bhopal railway station. Dara Singhji did not arrive by the Tamil Nadu Express." He listens, nods, then smiles. "(Lal Kishenchand) Advaniji stopped him," he tells his mates. "He told Dara Singhji how can you take a train to Bhopal when I am flying there today? Come with me. When Advaniji calls, how can Dara Singhji refuse? Let us go to the airport. They will be here at 10 am."

"BJP," screams one worker as the party activists leave. "ZINDABAD!" holler the rest.

The man who said Dara Singh would put on his Hanuman outfit and travel from place to place turns out to be right in a way. Dara Singh is flying the way Lord Hanuman would have done. If not with Lord Ram, at least with Kishen.