Why Mizoram is Lyngdoh's favourite state 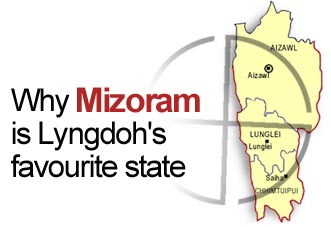 Chief Election Commissioner James Michael Lyngdoh was not off the mark when he recently said in Aizawl, Mizoram, "This is the easiest state to conduct elections."

Electioneering in Mizoram has always been an orderly affair, thanks in no small measure to the Church and influential social outfits like the Young Mizo Association.

In fact, most of the time outsiders have to make an effort to figure out whether polls are on.

There are no processions, no posters, and no microphones. Instead, candidates are brought on one platform and allowed to make a pitch.

The YMA, which has over 40,000 members across the state, takes the lead in arranging these debates, during which there are no goons, sidekicks or gun-toting security officers with the candidates.

On Wednesday, it was the turn of candidates from the Aizawl South I constituency. It was 6.30pm. Dinner taken, voters streamed into the community hall at Venghlui, a posh locality, to take their seats. W Pahlira, the Venghlui branch YMA president, rang a bell, and the proceedings began.

A senior resident of the locality read a passage from the Bible as the 300-strong crowd prayed.

Then Pahlira read out the rules of the game: "No candidate will criticise his opponents. No party will speak ill of others. And the audience will not clap until the speech of each candidate is over."

Each candidate was given 30 minutes.

After all had spoken, tea was served, including to the candidates who then interacted with the voters.

"We cannot allow the typical goondagiri of Bihar or UP that we see on television screens to come to our state. It will shatter the social discipline that has been in existence for long. Thus, the Young Mizo Association has been organising such public declamations for the candidates for the past three elections," said Pahlira, a science teacher.

All Mizos, in fact, have been members of the YMA at one point or the other. "I too was an active member of the YMA when I was a youth," said state Chief Secretary Lalhringa. "YMA has infused a fantastic sense of discipline and responsibility among the people," said K Liantlinga, a leading sports organiser and candidate for the Aizawl South II constituency, who is being jointly sponsored by the Zoram National Party and Mizo People's Conference.

The Church has also stepped in to reinforce discipline.

The Synod Mission Board, which is the apex body of the Presbyterian Church, the dominant church in Mizoram, last week issued a set of guidelines for political parties.

"We have told them that they should not create chaos in public life by blowing microphones and littering the places with pamphlets and posters," said Rev C Rosiama, executive secretary of the board. "The parties are also told not to use the power of money or muscle to influence voters."

There was a time when muscle and money were used in polls in Mizoram too. "But with the Church stepping in after considering it our duty to tell the people about god's wish that peace is the most essential ingredient of public life, things have improved significantly," Rev Rosiama added.

The Church has also issued guidelines to voters to consider carefully the character of the candidates before casting their votes. "And we have also created an awareness that every eligible voter should exercise his franchise as a solemn duty in a democratic set-up," Rev Rosiama said.

No wonder Lyngdoh has only words of praise for tiny Mizoram.