'Jogi's ouster is our success' 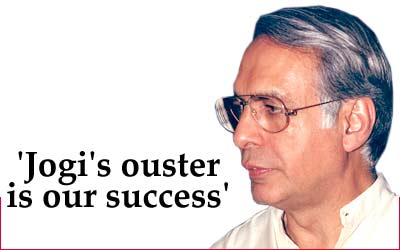 Vidya Charan Shukla, the 74 year-old Congress veteran from Chhattisgarh and a 'villain' of the Emergency era, is today getting a pat on his back from leaders of the Bharatiya Janata Party, no less.

Shukla, who is now the president of the Nationalist Congress Party in Chhattisgarh, was cordially invited by the BJP state brass to the swearing-in ceremony of new chief minister Raman Singh on Sunday.

When Shukla arrived at the venue, he was greeted by happy BJP workers shouting, "Vidyabhaiya zindabad". After all, a lot of the credit for toppling Ajit Jogi's Congress government goes to Shukla's relentless campaign against the former chief minister and to his eight-month-old party, which was instrumental in the defeat of Congress candidates in no fewer than 20 of the 90 assembly seats in the state.

In the state capital Raipur after the election results had been declared, Shukla spoke to rediff.com Senior Editor Jyoti Shukla talked about his party's future plans and strategy. Excerpts:

Your party could get just one seat in the assembly, though you enjoyed more public support than any other Congress leader. Are you disappointed?

If you count the seats, then the result is certainly disappointing. But if you look at the overall effect of our party on the election results, then we have succeeded to a great extent. Our first aim was to oust Ajit Jogi from Chhattisgarh and save this state from his corrupt government. I'm pleased that my single-handed fight against the Jogi government inspired the people to vote against him. His ouster has been our biggest success in this election.

Are you saying the BJP came to power in Chhattisgarh because of your anti-Jogi campaign?

Yes, of course! Election results are testimony to this fact. Our party was number three in 37 out of the 90 assembly seats. Of these, the Congress lost at least 20 seats because of our party's presence, which took away large chunks of the traditional Congress votes. In just eight months we succeeded in relating with the voter in Chhattisgarh and the voter showed that he trusted us.

Then why could your party not win more seats?

If you go by seats, then a party like the BSP [Bahujan Samaj Party] also won only two seats although it's many years older than the NCP, has been in power in a state [Uttar Pradesh] and has much more resources than my small party here. Compared to that, the NCP winning one assembly seat only eight months after I became party president speaks volumes for our effectiveness.

Now that the Jogi government is no longer in place, what will be your agenda for next year's parliamentary election?

That will be the real test of my party. In the assembly elections, we were facing the might of the state government [Congress] on the one hand and the central government [BJP] on the other. Still, we got good public support. This time people will be able to express their support more openly because the threat of political revenge is over. We hope to convert the public support to gain a voice for Chhattisgarh in Parliament as well, after getting a foothold in the state assembly.