The flag provides the flutter

There is Independence Day. Then there is a cricket match in India. The tricolour suddenly paints everything in its reach.

On the first day of the third Test between India and Pakistan, as expected, cricket merchandise was in plenty at the Chinnaswamy stadium. There were the omnipresent face-painters, and the cloth and paper flag vendors. The costliest flag came for Rs.60, the price later cheapened till it was agreeable to both parties. The Indian colours also made its presence on tardy headbands and paper caps. 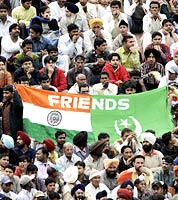 Inside the ground, spectators swirled the flags with pride. Almost everyone had one, in some form or the other.

Of course, everyone except the Indian cricketers. That's because before the start of the current Test series the home ministry had, citing a provision of the Flag Code of India which says the tricolour should not be used on costumes or dress materials, enforced a ban on sportsmen using the flag on their attire.

As long as that happens, who cares whether the flag is bargained for, crushed under the feet of enthusiastic cricket fans or thrown away once its purpose for the day is served.

The Chinnaswamy, in contrast, hasn't decorated itself with famous names. It's only the in-stadia advertisements that stare from the concrete.

Bangaloreans like to keep the achievements of its players wrapped in the walls of the clubhouse. There you find a unique piece of memorabilia. There are handprints of the cricketers, right from G R Vishwanath to Dodda Ganesh, in ceramic with the respective portraits hanging above. Everything neatly made up.

Although some of the romanticism surrounding its players seems exaggerated, the Karnataka State Cricket Association surely values its players.

Once in the press encloure, the eye quickly shifted to the restless chirpy man at the scorers' table. There rested a pair of crutches beside him.

M Yusuf, the scorer, had hurt his ankle while playing cricket on March 8. He had to be operated upon. He had a crepe bandage tied around the ankle and his movement was restricted. But that did not stop him from coming to the press box on the second floor.

Yusuf is 48-years old and has kept scores for the last 20 years. He also stood as a first-class umpire for 27 years. The enthusiasm for the game hasn't died, yet.

"I had gone for a club game to keep scores but they had a player short, so I joined in," said Yusuf, proudly. His fellow scorer, Nagaraj, and his colleagues from the umpiring fraternity tried to persuade him not to attend the Test, but Yusuf wouldn't have any of that. Cricket is his game for life.

Inzamam-ul Haq picked four runs off Harbhajan Singh in the last over before lunch to complete his fifty. The Pakistan captain doesn't celebrate fifties, but what appeared on the electronic scoreboard was baffling.

With his teammates still clapping for the landmark, the big board flashed 'Congratulations on fifty, Haidee Tiffin'.

The people operating the scoreboard had probably forgotten to change the name of the test slide.

But that wasn't an imaginary name.

Haidee Tiffin is a lady cricketer from New Zealand having a Test average of 124. That's also the total number of runs she has scored in the five-day format in two Test matches.

And, she is regarded as one of the best all-rounders in the world.