The king becomes a regent

Jagmohan Dalmiya may be relinquishing the top post in the Board of Control for Cricket in India, but behind the scenes he will still be pushing all the buttons.

With his selection as patron-in-chief, Dalmiya has ensured that his grip on power in the country's richest sports federation will not loosen and he will dominate proceedings for another three years at least. 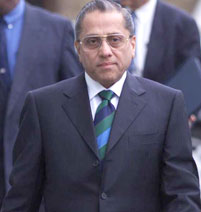 India, in many ways, is starting to become a country run by remote control, from the Sonia Gandhi-Manmohan Singh duo to Dalmiya and the new BCCI president (that's a head-on battle between Arun Jaitley of the Delhi and Districts Cricket Association and Ranbir Singh Mahendra of the Haryana Cricket Association).

In his new capacity, Dalmiya will be in charge of the following:

1. Finalising the selection of the Indian team

His elevation will enable him to attend ICC and ACC meetings until 2007 in a non-voting advisory capacity.

The 64 year-old Kolkata-based businessman's term as BCCI president ends on September 29 after the completion of a maximum three years in office.

BCCI joint secretary Ratnakar Shetty said it was N Srinivasan of the Tamil Nadu Cricket Association who took the lead in recommending Dalmiya as patron-in-chief, and as many as 27 of the 30 cricket associations affiliated to the board voted in favour.

Dalmiya needed only 16 of the 31 votes (30 associations plus one president's vote) to secure his appointment.

"We [the associations] decided that given Mr Dalmiya's vast experience and knowledge in dealing with the ICC and the ACC, it would be foolish to let that knowledge go waste," Shetty said.

But the proposal was actually tabled by Bikash Barua, secretary of the Assam Cricket Association. According to reports, a letter sent by the ACA to all member associations actually said that Indian cricket without Dalmiya cannot even be thought of.

But many former BCCI presidents believe Dalmiya's appointment will not be fair to the man who takes his place. Certainly, Dalmiya's clout and experience will always cast a shadow that his predecessor will find hard to step out of.

Dalmiya first became a member of the BCCI way back in 1979. Since then he has occupied the following posts in India's apex cricket body and the international cricket arena.

Dalmiya will continue as ACC president till 2006.

Dalmiya has been involved with cricket in every possible capacity. Yet he is not prepared to let go. It is undeniable that he has done a lot for Indian cricket and made the game far more profitable. But isn't it time to give others a chance?

A senior official in the BCCI said Dalmiya, in his new capacity, will handle all dealings with the ICC while the BCCI president's role will be restricted to the administration of the game in the country.

He also clarified that the decisions Dalmiya will take in his capacity as patron-in-chief will be have to be ratified by the board.

Yogesh Khattar, a member of the Bhopal Cricket Association, had filed a petition in a local court against the appointment. The court passed an interim order asking the BCCI to refrain from taking any decision contrary to its rules, but the board went ahead and appointed Dalmiya.

"The court asked us to not do anything against our constitution," Shetty said. "And we have adhered to that ruling. The member associations voted Dalmiya to the post; there was nothing unconstitutional about it."

Interestingly, Shetty said Dalmiya is not the first person to be appointed to this position. "If my memory serves me well, the first patron-in-chief was appointed in the 1930s. Lord Willingdon, the then viceroy of India, was appointed patron to the Board."

Clearly, the man with the Midas touch will continue to call the shots in Indian cricket.