The Union home ministry has selected four security officers to accompany the Indian team to Pakistan. 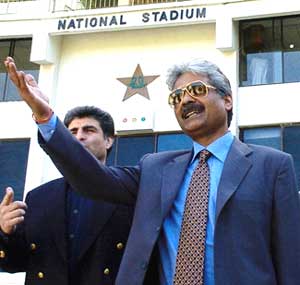 Amrit Mathur, the team's media manager, told rediff.com that Special Inspector General of Police Yashovardhan Azad, who was part of the three-member BCCI team that travelled to Pakistan last month to assess the security arrangements there, would head this team.

Azad, joint director of security in the IB, will accompany the Indian squad for the one-day series with Manoj Lal while Prabhakar and Dharmendra Kumar will escort the team for the Test series.

The officials will liaise with the Pakistani authorities on security arrangements. They will be briefed by the home ministry before their departure.