By Faisal Shariff
Last updated on: September 10, 2003 19:22 IST
A new cricket season gets underway in Bangalore tomorrow with the four-match TVS Salve Challenger tournament, which will see the Indian stars back in action after a five-month hiatus. 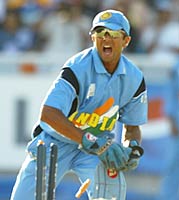 The reason: the Indian team is anything but settled and three months from a daunting tour of Australia, the hunt is on for Test-class openers and a One-Day International wicket-keeper: a scary scenario when you are about to play the world's best team in its backyard.

The hottest topic of discussion, however, is the ODI wicket-keeper's slot.

Rahul Dravid, the team's 'keeper until the World Cup 2003, is making his reluctance to continue playing that role public by turning the spotlight on to the three wicket-keepers at the conditioning camp held last week in Bangalore.

At the launch of the TVS Cup in the garden city, Dravid said Parthiv Patel was special and the number one 'keeper of the side; reminded everyone about Ajay Ratra, the 'keeper who scored a Test century, no less, in the West Indies, and Thilak Naidu, the Karnataka 'keeper who has lost tons of weight and scored runs by the ton in the domestic season.

"At the moment all three are well ahead of me," said Dravid when asked what he felt about Ganguly's desire to continue with him as the wicket-keeper.

The writing on the wall is clear: India must look elsewhere if they want Dravid to do his primary job of scoring runs and stabilizing a team saturated with strokemakers. Never mind the statistical fact that his batting average has gone up since he donned the wicket-keeping gloves.

Ever since the team forced Dravid to perform the dual role of batsman and wicket-keeper, the only loophole in the line-up has been the number three spot. Dinesh Mongia has clearly failed at number three. So perhaps it makes more sense to have Dravid come in at number three, four or five and have a healthy contest amongst the wicket-keepers (Patel, Ratra and Naidu) for the number seven slot.

Just as Tendulkar's wish to bat at the top of the order was granted, it is important to pay attention to Dravid's continuing reluctance to don the wicket-keeper's gloves. It worked for the team when Tendulkar opened during the World Cup; will it work for the team again if Dravid is relieved of his responsibilities behind the stumps?

Meanwhile, India coach John Wright has applauded the selectors for picking three evenly balanced sides for the tournament. "There will be good competition for places," the New Zealander said. "It is a great opportunity for players to stake their claim for a place in the national side. It is very important to see players in a competitive situation.

"I was looking at the sides and it is hard to separate one from another."

Wright said the India Seniors, the team he's coaching at the Challengers, has a lot of options for the opening slots. "Sourav Ganguly and Sanjay Bangar are the first choices; Parthiv Patel is another option. So is Akash Chopra if he passes the fitness test."

Wright revealed that Punjab all-rounder Reetinder Singh Sodhi also wants to open the batting and could be a fifth option.

Wright has repeatedly stated that he wants "tough cricketers" for the tour of Australia. Cricketers who have excelled in the Challengers in the past have not always managed to make the cut in international cricket -- medium-pacer Amit Bhandari and middle-order batsmen Hemang Badani and Amay Khurasia spring to mind.