News
Business
Movies
Sports
Cricket
Get Ahead
Money Tips
Shopping
Sign in  |  Create a Rediffmail account
Rediff.com  » Sports » I am not trying to prove anything: Laxman

I am not trying to prove anything: Laxman

The new V V S Laxman is a fusion of Rahul Dravid and Sachin Tendulkar. The artist and the breadwinner have merged and salvaged India's prestigious home record. 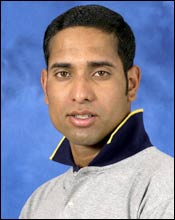 Many believe this is Laxman's second coming after being dropped for the World Cup earlier this year. But not the stylish Hyderabadi, who won the Man of the Series award for his sterling performances in four Test innings against New Zealand.

"I am not trying to prove anything; I don't have to," Laxman told rediff.com "I had a great last year, except for the New Zealand series, but none of the others managed to get any runs also. Then came the shock exclusion from the World Cup squad.

"I was keen on starting the new season on a positive note and am glad that it has got off well."

Laxman was always accused of playing like a millionaire, but the last year has seen him in different light. "To be honest I have been concentrating on shot selection. It was important to work on that and the results have shown," he said.

On Day 4 of the second Test against New Zealand, India managed to score just 187 runs with Tendulkar and Laxman at the crease. Many wondered what the reason was for the uncharacteristic approach.

"The New Zealand bowlers bowled really well and to a plan," said Laxman. "Their fielding was brilliant and it put a lot of pressure on us. They had set well-thought-out fields for all of us. When Tendulkar was dismissed first ball after tea it was important that I stayed at the wicket. There were new batsmen at the other end, first Yuvraj Singh and then Parthiv Patel."

He paid tribute to the New Zealand team. "They are a very good unit. It is not advisable to underestimate them," he said, ruing the missed chance of wrapping up the series in Ahmedabad itself.

"We should have won in Ahmedabad. The track was result-oriented. Craig McMillan and Nathan Astle batted exceptionally well. One wicket at that time and we would have won that Test."

Laxman believes the toss was crucial in deciding who dominated the Mohali Test. "The Mohali track was flat for the first two days and the Kiwis batted really well. It slowed as the match progressed. There was not much in the wicket early on. There was something in the wicket over the last two days, making batting difficult. There was some seam movement and [Daniel] Vettori was getting appreciable turn from one end."

Laxman agreed that matches should be result-oriented to make Test cricket interesting for the viewing public.

Talking about the Australia tour starting in December, he felt it would be a different ball game. "The conditions will be different; the attack will be different. The mind-set needs to be different. It will be a challenge. But the team is well-prepared for the tour and we hope to change things around a bit," he affirmed.

For the moment, he is happy to be back in the one-day squad for the upcoming tri-series involving New Zealand, Australia and India, and keen to make a mark and contribute to the team's success.

"It will be an exciting series. It will be important to win before we set off for Australia."