The Australian Cricket Board offered him the responsibility of handling all aspects of the academy program, focusing on fast-bowling analysis and specialist feedback on technique. 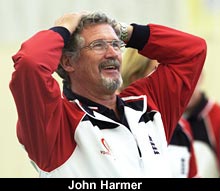 For a country that is an era ahead of other cricket-playing nations, the process of refining their performance never seems to end. At a time when their fielding is unmatched, coach John Buchanan is on a radical path again -- to develop ambidextrous players who can field, bat - and possibly even bowl -- right and left-handed.

Cut to Bangalore, India, and the scenario is nothing if not dark. The National Cricket Academy, set up three years ago was all set for a face-lift. Under the chairmanship of Brijesh Patel -- a former Test cricketer and current convener of the national selection committee -- the process of changing the face of Indian cricket was underway.

Australian psychologist Sandy Gordon, whose interactive sessions with the Indian players boosted performance during the World Cup in South Africa, was to set up a center at the academy to analyze the mental strength of the young turks.

As per plan, Gordon was supposed to interview various former cricketers, administrators and journalists to get a strength ratio of the Indian athlete. Gordon believed that by merely implementing the Australian format in India, little would be achieved because the differences between the Indian and the Australian physical capacity were enormous.

Based on the data collected, Gordon was to then prepare a questionaire to mark the toughness levels of the young trainees at the academy.

Simultaneously, Sri Lankan coach Dave Whatmore was asked to head the academy with national team coach John Wright as joint head coach. The duo would draw up a list of names and chalk out a blue print for the running of the academy. Physical trainer Adrian Le Roux would give the fitness regimes to the young kids in a bid to bring them up to international standards.

None of this happened -- because a few former cricketers who have a say in the establishment vetoed the move.

'Too many foreigners was the argument. Thus, what seemed like a great opportunity for the NCA to get off to a promising start has taken an abrupt jolt. According to a BCCI source, John Wright was informed that he was selected as head coach of the NCA and asked to report in Bangalore on May 1. This was after Wright had lost his father, and yet rushed to Dhaka despite the personal tragedy to be with the team in a meaningless triangular.

Instead of giving the man a break, he was asked to rush down to Bangalore.

"The ploy seemed simple. Make an offer to John that would force him to reject it, and thus get him out of the system," said a senior board official.

In the event, since all plans were stymied by the lobby of senior cricketers, John's visit became a waste of time.

After a meeting between John Wright and BCCI chief Jagmohan Dalmiya, it was agreed that Wright would travel back home to Christchurch in New Zealand to spend sometime with his kids and then come back end of May to hold a conditioning camp for the Indian team in July for 10 days.

Dalmiya, however, mentioned that he was also keen that Wright train coaches in the country, and get professionalism into the coaching vocabulary in the country.

The venue for the camp is undecided, but it promises to be a tough experience for the players after a two-and-a-half month lay-off. The logbooks, which file the fitness regimes of the players, have been handed to the players in Dhaka along with individual programs which the players are expected to follow.

Any player who fails to pass fitness tests at the camp will be severely reprimanded.

A pool of 28 has been recognized by Wright for the camp in July.

The last time a camp like this was held was in 2001 in Chennai, before the Australian series at home.
Faisal Shariff
COMMENT
Print this article