'I don't want to be treated like a coolie'

Sinna Mani, president of the British Organisation for People of Indian Origin, is livid. He has been attending the Pravasi Bharatiya Divas, the annual conclave of overseas Indians, every year. But this year, he says, "The event has been organised so badly that no one knew what is happening here."

Mani, who was the mayor of the London borough of Lewisham and a member of the Investment Regulatory Authority in the United Kingdom, says he is currently involved in investment projects worth nearly 100 million pounds. His projects include a theme park in Haridwar, Uttaranchal, and a holiday home in Amritsar, Punjab. 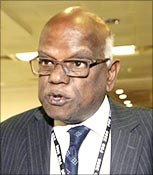 In conversation with Rediff India Abroad Managing Editor George Iype, Mani says the PBD this time is lacklustre. But despite the hurdles, the meet should go on year after year, because it is a unique meeting point for Indians the world over, he insists. Excerpts:

Are you happy with the way the PBD is organised this year?

Not at all. I am happy that the government is taking the initiative and organising it, but the confused manner in which it is organised leaves a lot to be desired. There is no coordination between the organisers and the delegates, and no one knows who the speakers are and what they are speaking on. It should be more systematic and proper.

Were the BOPIO delegates not taken care of at the PBD?

It is not a question of whether we have been taken care of or not. Abroad, across the globe, Indians have been treated as coolies. Here when we are in India, I do not want to be treated as a coolie.

Why are you disappointed with this year's PBD?

The earlier enthusiasm is lacking. I -- on behalf of the people of Indian origin settled in Britain -- congratulate the Indian government for organising the event. But it is a great pity that sufficient number of NRIs [non-resident Indians] and PIO did not turn up for this event. More than 4,000 overseas Indians participated in the first meet [in 2002]. But this year, the number is less than 1,000. Even the Ministry of Overseas Indian Affairs does not know the exact number of participants.

Do you think the NRIs and PIO are losing interest in attending the PBD?

Maybe that is the reason. But my interest has not come down. I love coming over and meeting everyone from across the globe. If the PBD is being held next year, BOPIO promises to organise a regional event to galvanise support in Europe.

PBD meet: India welcomes its own

What does BOPIO do for Indians in Britain?

BOPIO has been established to give the people of Indian origin a platform to take up issues that concern their lives and welfare. Our main aim is to promote the social, economic, legal, moral and educational interests of people of Indian origin in Britain. We support, encourage, promote, and, wherever possible, initiate surveys and research into issues affecting the community's wellbeing. We also lobby on behalf of the community at a national level on issues of policy and policy-making affecting the Indian community.

You recently said you are launching an airline.

Yes. We have launched an airline called Tara Airline Plc. It is a UK-based company promoted by people of Indian origin to fly between the UK, India and the United States.

Column: Harnessing the power of the NRI

Does India's march towards progress and development impress you?

Yes, in the last few years, India has been the subject of endless discussions across the globe. India's success story in IT [information technology] is simply great. We need to present similar success stories in the fields of infrastructure, agriculture and industrial production. And the quality of services in every sector in India should improve. The hotel here in Hyderabad where I am staying could not properly send a printout. So, there is an urgent need for improvement in the quality of service that India offers to the world.