Six heavily armed terrorists, who made an attempt to storm the high-security makeshift Ram temple in Ayodhya were killed before they could make it to the shrine.

The attackers came in an ambassador car at around 0900 IST, following an explosive-laden jeep, which they rammed into the security barricade to breach the cordon.

While one militant who rammed the jeep was blown to pieces, five others were killed in the encounter with security personnel, Faizabad Commissioner Arun Sinha said.

Sources said that a woman devotee, who happened to be near the scene of blast, also succumbed to her injuries in the hospital, official sources here said.

Principal Secretary Alok Sinha said in Lucknow that all the pilgrims were safe and no damage was done to the temple area.

He said the driver of the ambassador car has been arrested and three security men were injured in the operation, which lasted nearly one-and-half-hours.

Police sources said that the militants were disguised as devotees.

The barricade and the protective wall collapsed as a result of the explosion and the militants were able to gain entry into the campus through the Sita rasoi (kitchen), Sinha said.

He said the security personnel however intercepted them.

In Lucknow, the state police chief Yashpal Singh said the militants could not reach the makeshift Ram Temple and were stopped much before that by the security personnel.

Police sources said the arrested driver Rehan is a resident of Ayodhya and he was being interrogated.

Four AK 47 and AK 56 rifles, some hand grenades and ammunition were recovered from the bodies of the slain militants, they said.

This is the first terrorist attack on the disputed complex since the makeshift temple came up after the demolition of Babri mosque 13 years ago. 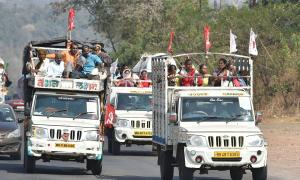 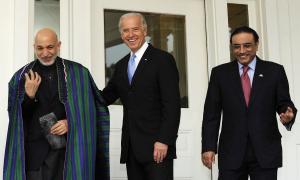