Expect quake after-shocks for next 3-4 days

After-shocks of Sunday's earthquake may be felt for the next 3-4 days and people living in coastal areas should take special care during the next two days, experts have warned.

The east and south coast of India was lashed by tsunamis triggered by a major earthquake [measuring over 8 on the Richter scale] with the epicentre in the island of Sumatra, Indonesia in South East Asia.

"Whenever this type of a big earthquake occurs, after-shocks can be expected. In this case, after-shocks may continue for 3-4 days," Earthquake Risk Evaluation Centre's director A K Shukla said adding, "It may even go beyond that."

Although the after-shocks are of lesser magnitude, he said, "For 1-2 days, care should be taken in coastal areas."

The Indian Meteorological Department said the earthquake, recorded near Sumatra Islands in Indonesia, measured 8.1 on the Richter scale.

"The effects of a quake of such magnitude can be felt up to 2,000km," a Chennai-based expert said.

Eastern India was rocked by an earthquake, about 1,000km away from Port Blair, at 0629 IST while the coast was lashed by tsunamis resulting in over 1,000 deaths and damage to property in Andaman and Nicobar Islands, Tamil Nadu, Andhra Pradesh and Pondichery. 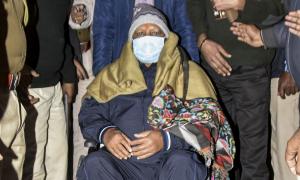