Sign in  |  Create a Rediffmail account
Rediff.com  » News » 'Magic is about the effect, not how it's done'

'Magic is about the effect, not how it's done' 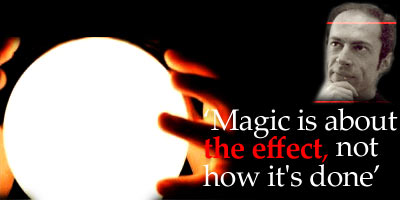 Part I: 'Every culture believes in some sort of magic'

You said the Western perspective on Indian magic lies in [American intellectual] Edward Said's concept of Orientalism. Can you explain?

Yeah. The reason why Indian magic is interesting to me is, partly as a performer, even to watch it is different from Western magic. But in terms of the academic argument, the way in which Said has said the West constructs an image of the East, along the lines it is different and inferior to the West.

According to this discourse, the magic of the mystic East is the result of an image constructed over time of the East, which was different; not necessarily inferior... in some ways superior. Perhaps the East has its advantage in terms of its spiritual, mystical knowledge that the West did not have. So this is a dichotomy between a material superiority of the West  according to Western views  and a spiritual inferiority to the East. This offsets the myth that the West had political, material power and to some extent cultural power over what was being reported at that time.

But there's still an increasing sense that the East, and in particular India, has some knowledge that we have lost or had never known. And that might offer some hope to people who are disenchanted in the West. Hence the spiritual quests and the rise of the East as the place of the gurus, miracles, and of course the Indian Rope Trick, the most famous example of how people in the West imagine that in India things can happen that were not possible in the West.

What fascinates you about India?

Well, it's very different from home; in terms of culture, language, food, climate. Magic here is different too; especially in terms of the settings involved in a performance.

I know it is impossible to see India as an Indian. The maximum one can do is see India as a Westerner does. There is a great respect for the spiritual aspects of India; people in the West see India as the land of real magic. Personally, I don't think it is; but this perspective of the West fascinates me.

How do people back home react to you being a magician? How do they take to your deep connection with Indian magic?

Generally the first response is, show me a trick. I guess this is the standard response, even in India, when people find out you are a magician. But when I tell them I am a parapsychologist, their reaction is different. "So tell me, what is the most weird thing you have witnessed," or "A funny thing happened to me when..." So I generally refrain from introducing myself as a parapsychologist. 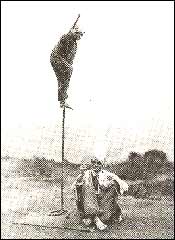 The issue is clearly between trickery being the magic of the Western magicians, and real magic, which is Indian magic. Back in Britain, we don't really have godmen. Of course, we have Tony Blair, but he clearly is no godman.

How did your first book, Magic in Theory, come about?

Oh! That was a job. A colleague, Richard Wiseman, phoned me up and said, "I have a grant to write a bibliography on the psychology of magic. Would you be interested?" I said yes, because I thought that to be a job. Then we quickly decided that it had to be a book. Just a bibliography would be no good to people who did not know a lot about magic. So the book came about from the idea that we wanted to write for psychologists and parapsychologists, information that you would inform them how you can deceive people, and how you might use that information to pretend to be psychic.

We did not expose the secrets of magicians, the methods of magicians. But we included a lot of information on the psychology that magicians use. Feedback received from psychologists and magicians told us that this was very useful instruction on how one can deceive people. It's not about having something up your sleeve. It's about getting something up your sleeve without anybody noticing. And that's primarily psychology rather than some unknown secret.

How would you define magic?

Magic can be defined in many ways. To me magic is an effect, which is inexplicable. The method might be trickery, or the method might be what you call paranormal. But I think the easiest way to define magic is in terms of the effect. When you define it in terms of the method, you have already given it a cause, and it becomes very complicated. When you can't be sure of the cause, you guess what the cause is, and when you guess you may well be informed by your own prejudices; whereas if you look at it in terms of the effect, say levitation, then there is no confusion.

Levitation has been performed in India for a long time, and is an example of Indian magic. Now that might be a trick, or it might be something else. But by defining it in terms of what people reported, I think you avoid ruling out areas that should be included. I might say, yes, I think it was trickery, perhaps it was hypnosis, perhaps it was an exaggeration over time. But the magic itself is in the effect, which any magician will tell you. Magic is about the effect, not about how it's done. That's the puzzle. Magic is something happened which should be impossible. By sticking with what people saw, what people reported, I think you include all the important aspects without ruling [any] out.

Some people deal with superstition, for example, or spiritualism, or pseudo-psychic effects. Some magicians will say that's not magic, because people are claiming to have real powers. Whereas most people, non-magicians, would say that it is magic, because they don't care about the method.

Much of your recent research has been focused on the legendary Indian Rope Trick. What is this trick we keep hearing about?

Recently many contemporary Indian magicians have been able to make the rope rise into the air, and stand erect without any support; even get a child to climb up the rope. But the impossible aspect, and so the most important component of the effect, is the vanish of the boy at the top of the rope. Without the vanish it is not the Indian Rope Trick.

Many researchers have talked about the Indian Rope Trick being an exaggeration and misrecall of witnesses. Even Richard Wiseman and you put forth this theory in one of your papers.

When many witness accounts of the Indian Rope Trick began appearing, people would say they are exaggerating, or they are lying, or they are mad, or that they are on drugs. So there were lots of theories; but there wasn't any one single, solid, correct evidence connecting one to the other. What Richard and I did was gather together all the firsthand eyewitness accounts; all the people who said, "I saw with my own eyes."

In order to test in our way what was going on, that means hypothesise that it was exaggeration... we thought that was the most plausible theory, and felt that we would test that. So we took all eyewitness accounts that had certain information about the trick, and also said when they saw it, and when they reported it. Based on this we could plot a graph which shows that longer the distance, that is longer the time gap, between when they saw the trick and when they reported it, the more impressive was the trick being reported.

How did this idea change? What brought about this new book on the Indian Rope Trick?

Well, the research I did on the Indian Rope Trick with Richard Wiseman was about what was really going on in the minds of the people. As a historian there was another question that was equally interesting; And that was, how did the legend (of the Indian Rope Trick) get started in the first place? If it was exaggeration over time, then nobody saw an Indian rope trick, but some very banal things.

So how did something that nobody had actually seen become the greatest legend of the East, at least in the eyes of the West? And that was a question for a historian. So I began to look at what people had said.

The book deals more with how the legend began, and not really whether the rope trick was performed or not?

The book [The Rise and Fall of the Indian Rope Trick] deals with both of these aspects; in terms of all sorts of aspects of how people thought it might be done, with how the whole history of this magic was invented later. But the primary question was, how did the legend get started.

What I found out  what nobody knew before  was contrary to the existing theory that it was an ancient Indian myth that had been seen by Marco Polo, that huge rewards were offered in 1875, et cetera. Actually the legend did not begin in India, it isn't ancient, Marco Polo never saw the trick, there was no reward offered in 1875.

In fact, the legend rose to fame as a result of a newspaper article, which was written not in India but in Chicago, in the Chicago Tribune. That's what started the legend going. And I also found that the person who wrote this piece later became the head of the American Secret Service, which gave a kind of interesting edge connected to propaganda and misinformation.

It [the book] is also about how the legend, having got started, continued to spread through hoaxes, through exaggeration, through the media, through misreporting, through hoax photographs, through magicians hungry for publicity, and through some very eccentric people who had some very weird ideas of what was possible.