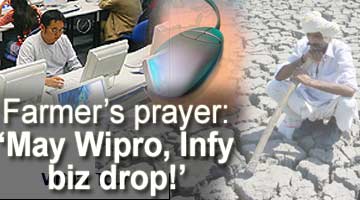 K Nagappa, a farmer in the Bellandur village on the outskirts of Bangalore, goes to the local temple everyday and remembers software giants like Infosys Technologies and Wipro in his prayers.

His prayer: 'Let the business of Infosys and Wipro go down. Let there be no more software companies in Bangalore.'

Nagappa is one of the thousands of aggrieved farmers on the outskirts of India's Silicon Valley earnestly praying against more technology firms coming to the city.

Bangalore has been witnessing explosive growth as hundreds of global technology and software companies set up their base in the city.

But the city no longer has any more space for new tech firms to come. So, it is villages like Bellandur that are being slowly transformed into technology parks, with IT firms acquiring farmlands and setting up their operations there.

"These IT companies have killed our villages. We have lost our lands and our cattle. And we are left jobless," laments Nagappa, whose four cows earlier fetched him enough money to run his six member family.

But that was three years ago. The paddy fields he worked in no longer bloom with rice crop.

In Bellandur village, situated on the Sarjapura Outer Ring Road, is the epicenter of the IT satellite township that the Karnataka government has proposed. Scores of IT firms have already acquired farmlands in the village, and construction is going on at a frenzied pace.

As Bellandur's metamorphosis began, adversity visited the lives of farmers like Nagappa. He was forced to sell his one-acre of farmland to local real estate sharks. He sold his cows too. Now Nagappa stays in a shantytown on the outskirts of Bellandur.

The explosive IT boom in and around Bangalore is uprooting dozens of villagers on the city's outskirts. Like Bellandur, there are other villages that are becoming IT satellite townships. They include Bomsandra, just outside the Electronic City, where tech giants like Infosys, Wipro, Hewlett-Packard and Siemens are based.

But even as the IT boom transforms their farmlands into concrete jungles, a team of zealous villagers has stood up to fight and save their pastoral settings from 'preying' IT giants.

"It is a battle we will fight to the end. We will not allow the IT companies to destroy Karnataka's villages. If you lose a village, you lose the soul of a state," says K Jagannath, the Bellandur gram panchayat president.

For two years now, Jagannath has been leading what he calls 'the battle against the software industry.'

His battle began in 2002, when he organized the Bellandur villagers against Infosys. The company was planning to set up its second largest campus at a 100-acre campus in Bellandur, when the villagers took up cudgels against it.

Infosys came under attack from the Bellandur villagers who alleged that the IT major was grabbing wetlands at rates much lower than the prevailing market rates.

According to the villagers, the price of land at Bellandur area ranged from Rs 40 lakh (Rs 4 million) to Rs 1.5 crore (Rs 15 million) per acre in 2002. But the Karnataka Industrial Areas Development Board -- under whose jurisdiction the land falls -- agreed to sell 100 acres to Infosys at a uniform rate of Rs 9 lakh per acre.

So to take up the fight against Infosys, Jagannath travelled to New Delhi during an annual economic summit seminar where Infosys mentor N R Narayanan Murthy was a key speaker.

Murthy denied the charges of land grabbing saying that the company was unnecessarily being dragged into a controversy.

The land grabbing charges forced Infosys to abandon its second biggest development center in the company's home state of Karnataka.

Jagannath says that the villagers' fight would continue till social and economic justice is meted out to them. The gram panchayat president who has seen the sleeping Bellandur village being transformed into an IT hub says that a few years back selling one's farm was considered sinful in the area.

"Farmers here looked at their land and cattle as God-given property. Now they are homeless, rootless and many of them are ending up in slums that are coming up around these IT towns," Jagannath says.

"Look around the outskirts of Bangalore. The IT industry is bringing in growth to that particular industry, but it is bringing only devastation to the villagers," he says.

To get a sense what is going on, just travel outside Bangalore. The road to the Electronic City is neat. Inside the City, beautiful glass front buildings with landscaped gardens greet you. But no sooner do you get out of the Electronic City and head for Skikaripalaya village, that the darker side of things hits you.

The roads in Skikaripalaya are all muddy; opposite the village stands the glamorous Wipro office. In Skikaripalaya, regular power supply is rare, as is tap water. Garbage heaps -- a legacy of the IT town -- are found all over the village.

But amidst the chaos that Skikaripalaya is witnessing, frantic construction work is also going on. K Ramachandra, a resident of Skikaripalaya, says that almost every week, the foundation stone for a new IT company is being laid.

"Each week, some part of our village is being lost forever. Together with that, also ending is the peaceful lives of many villagers," he says.

"Urbanisation of villages on the outskirt of a city like Bangalore is unavoidable. But it should be done taking into account the sensitivities of the villagers," says Krishnaraj.

Krishnaraj, who conducted a field study in a cluster of villages outside Bangalore for a multinational real estate company, says he saw many villages losing their 'culture and identity because of the unplanned growth.'

"The government has to put in place a mechanism to safeguard the interests and lives of the villages who are being uprooted outside Bangalore because of this IT boom," the architect adds.

Officials at the Karnataka Industrial Area Development Board, which is in charge of acquiring land for IT firms, argues that villagers have not been uprooted because of the IT explosion.

"The city has to grow outside Bangalore, and it is a logical process of development, especially in Bangalore," he said.

He says there have been few cases of land encroachments on the outskirts of Bangalore. "Only those lands that have been notified for buyouts are being acquired," the official said.

He said the government and organisations like the Electronic City Industries Association are doing a lot to improve the lot of villagers, especially whose lands are being acquired.

For instance, ECIA has set up a Trust that runs charity works like mid-day meals for village schools, provision of books for students and jobs for jobless villagers.

Be that as it may, the farmers are up in arms against the idea of setting up more IT firms in villages around Bangalore.