Sir Donald Bradman must have been a genius. He averaged 99.4 in Test cricket and, by all accounts, decimated attacks, showing them no mercy. 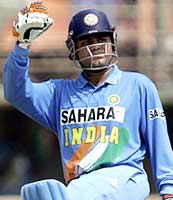 Today, Virender Sehwag must come close to resembling a modern day genius because of his unerring and unnerving ability like Sir Donald to manhandle attacks and make Test match bowlers look like pop gun attacks.

For me, he has redefined how an opening batsman can approach an innings. His performances in this recent series have been quite phenomenal. We helped him at Mohali by dropping him early on; but then, that is the game, and it is not Sehwag's fault if the opposition would not accept chances.

He is effortless, with sublime timing; he is destructive, often able to score over 10 in an over; he puts the bowlers under severe pressure often until they crack; he hits sixes as though the ground is only the size of a postage stamp. He gave us grey hairs trying to find ways to dismiss him!

I would often sit in front of the computer, with Sehwag's innings on the biomechanics screen, searching for the weakness; looking for the line and length that would give him most difficulty.

In the end, we settled for a short ball, targeted into his chest. While this stunted his run scoring, we did not get him out this way.

Early on in his innings his strength is his weakness; the short ball swinging away, but on a tight line to the off stump, might induce a nick to the slip cordon. If he tries to hit it harder it often flies over the slip cordon, or if you are lucky he drags the ball off the inside edge onto the stumps. They are not conclusive ways of bowling to him, however.

We were able to run him out occasionally, and at times he gets careless. We did not see much of that in this series, unfortunately.

What makes him so good? He follows the most important basic principle of batting: he is still when the ball is released and is, therefore, able to judge length early and then make the shot timorously without flaw. His balance when he hits the ball is a joy for any coach to study as he transfers his weight perfectly, makes contact with an ability to hit the ball extremely hard, but looks as though he is just caressing it. It is the wonderful gift of timing, pure timing, that makes him so dangerous.

When I watch him he seems to have no regard for a bowler; it is the presence of a man who does not believe he can get out.

Yet, despite all the above, Sehwag's results in the limited-overs matches are significantly poorer than his Test match record. The white ball is not his favourite; he plays differently as though he is a loose cannon; the discipline that he shows in the multi-day game seems to go out of the window and it looks as though he is in a competition to see how far and how often he can hit a boundary.

While he is still very dangerous, he gives the bowler more chances. I guess that is also the nature of the game. It is interesting why he cannot just bat normally for 45 of the 50 overs as he is such a good player that he would still ensure a big score.

Though Sehwag and Tendulkar form one of the most destructive combinations at the top of the order, neither seems prepared to go the distance and both want to outscore each other!

Sehwag's off-spin bowling is totally under-utilised and it staggers me that he does not bowl more. He is excellent in the field, takes catches in the deep and close with relative ease. He is a very complete cricketer.

His batting definitely takes on the qualities of a genius. Like Bradman used to, he is able to dominate attacks and will do so all the while that he is prepared to be hungry at the crease.

I cannot imagine a better technique, and he could perhaps play the short ball better. But there have been a lot of batsman who have played the same way. Hooking too early can lead to dismissal and stern and angry looks from coach, captain and team-mates.

He is so confident in his ability that he was quoted as saying that if he had not been run out he would have won the game for India in Bangalore. We shall never know if that would have been the case. He was certainly a threat and Inzamam delayed his declaration because of that threat.

In conclusion, India have unearthed a jewel. Amazingly, he learnt his cricket as a middle order batsman, but has taken to opening like a duck to water. His technique is one to copy; his propensity to go on and on after scoring a hundred makes him a modern day great.

However, and most remarkably, it is his sublime timing that, for me, makes him a genius.

Bob Woolmer
Source: PTI© Copyright 2020 PTI. All rights reserved. Republication or redistribution of PTI content, including by framing or similar means, is expressly prohibited without the prior written consent.
SHARE THIS STORYCOMMENT
Print this article

Official behind 'Swadeshi' goof-up transferred out